At a time when consumers are becoming increasingly concerned about the use of chemicals in food production, and organic produce is becoming more and more popular with shoppers, it’s perhaps no great surprise that there’s a backlash.

Farmers Weekly, which claims to be “the leading voice in the UK agricultural industry”, has launched a Save Our Sprays campaign against EU plans to change the rules by which pesticides, herbicides and fungicides are approved for use. 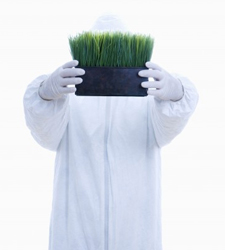 The European Commission’s proposing a new Regulation under which any new chemical (and all the existing ones) will be approved on the strength of a “hazard-based” assessment (“Does it contain substances known to have harmful effects on humans?”) instead of a “risk-based” one (“Are these substances being used at levels and in locations where they will be dangerous?”).

The UK Government (in the shape of the Pesticides Safety Directorate) has expressed concerns over some of the proposals. Small wonder: the Commission proposals threaten loss of 20%-30% of wheat yields, and up to 100% of carrot and parsnip yields. With warfarin also banned, efforts to control the number of grey squirrels would also be set back.

However, there’s more to it than that. The European Parliament also has a say in the legislative process, and its proposals are far more swingeing. According to the PSD:

If the full potential impact of the current Parliament proposals were realised, conventional commercial agriculture in the UK (and much of the EU) as it is currently practised would not be achievable, with major impacts on crop yield and food quality.

There are already serious concerns about the world’s ability to feed itself. The shift of much of the developed world’s agricultural production towards biofuels (to supplant the ever dwindling and ever more expensive oil supply) is reducing the amount of land available for food crops. This in turn could mean serious shortages of food worldwide, resulting in higher prices in the developed world and the spread of famine elsewhere.

So it’s understandable that farmers should feel frustrated if, at a time when food prices are shooting upwards, there are proposals from “Brussels” to make it even more difficult for them to produce worthwhile yields from their fields.

All the same, there are still reasons to be a bit uneasy about the Farmers Weekly SOS campaign.

Regardless of the ethics of the issue – and there may be an ethical case to be made in favour of pesticides – it doesn’t reassure me when these organisations wrap up what they make in cosy words like “crop protection products” rather than using more straightforward words like “pesticides” or “weedkiller”.

It also sets my alarm bells ringing when people appeal to my emotions rather than my reason. Farmers Weekly‘s perfectly entitled to editorialise if it wants to, and the proposed legislation may well be flawed. (The fact that it’s apparently been put forward without an impact assessment by either the Commission or the Parliament suggests that it may well be.) But I object to reading news reporting which is peppered with words like “crazy” and “nonsense”.

Nor do I think it’s particularly honest to criticise the legislation simply because it’s been put forward by “unelected officials in one directorate of the EU Commission”. Unelected officials draw up legislative proposals in many countries, including the UK; it’s part of what they do. But it’s the elected government of the day that decides whether the proposals are adopted.

What I find most dishonest of all is the invitation to “Sign our petition” that’s liberally peppered over the Farmers Weekly website. The links don’t take you to a page which tells you what the wording of that petition is; it just opens an email form to Farmers Weekly which allows individuals to vent their spleen, as well as apparently passing their signature to a “blank cheque” petition. (As of today, about 150 people had apparently used this form.) I’ve had a good look round the rest of the website, but there’s absolutely nothing to show what the wording of the “petition” is.

It’s understandable that farmers will be concerned about their livelihoods. That’s legitimate. And they may well have a good case. But putting it the Farmers Weekly way isn’t helping it.

3 Responses to “Save Our Sprays?”