Ever considered squirrel for dinner?

You may find the whole idea gross. But if you think about it, rabbit’s just another member of the rodent family, but it’s generally accepted as fit fare for the dining-table – even if it’s not as common as it used to be. The Romans used to eat one particular species of dormouse (which they introduced into the UK – it’s known, predictably, as the edible dormouse). So why not squirrel? 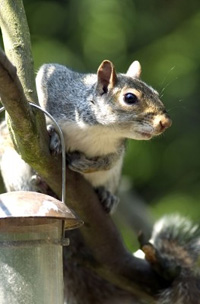 The idea of eating squirrel isn’t particularly new, and indeed is well established in certain parts of the world. In the eastern United States, which is the native habitat of the grey squirrel, it’s quite common for hunters to go out looking for squirrels for the pot.

One way of catching them is by going squirrel fishing! The “fisherman” ties a peanut or other similar bait to a line, then attempts to lift the squirrel into the air while it’s busy trying to get the nut off the line. However, this seems to be a sport rather than a means of obtaining food – it seems to have started on a university campus in the US, although no-one’s quite sure which; several different institutions have laid claim to be the originators. Those wacky students, eh? (It didn’t stop The Times listing it as one of their top ten ways of foraging for free food, though.)

More seriously, there’s been an increase in efforts to cull the population of grey squirrels in the UK in recent years, prompted largely by efforts to protect the threatened native red squirrel. (Although grey squirrels don’t actually fight red squirrels directly, they’re more effective competitors for food in the same habitats – which themselves are becoming scarce as a result of human activity – and have thus forced red squirrels into decline.)

The Red Squirrel Protection Partnership in the North of England decided in 2007 that simply disposing of thousands of grey squirrel carcases after they’d been caught and killed was a waste of good food. So they approached various restaurants and butchers in the area to see if they’d be willing to sell them. One restaurant in Crook near Windermere decided to prepare them in the style of crispy aromatic duck and serve them as free appetisers, to familiarise people with the idea of eating squirrel. And a game shop in Corbridge sold over 1,000 squirrels in the first half of 2008, at £3.50 a throw.

So squirrel’s sudden popularity is largely for ecological reasons. But protecting the red squirrel is just one aspect of this. There’s also a growing willingness to accept roadkill as a source of food. Some people who refuse on principle to eat meat from animals that have been reared for slaughter are perfectly willing to eat roadkill. Others eat it on the principle of “Waste not, want not”.

BBC Three even broadcast a series called Roadkill Chef, presented by expert forager Fergus Drennan, in January 2007. And Channel 4’s The Wild Gourmets, Tommi Miers and Guy Grieve, came up with a Peking squirrel recipe during their visit to Cumbria in October of that year. (Wonder if that’s where the Crook restaurant got the idea from?)

(Mind you, the BBC aren’t always so keen on exotic meat sources. The former presenter of One Man And His Dog, Robin Page, was invited to return to the BBC to discuss his thoughts on controlling grey squirrels. Someone had the bright idea that Page should cook some grey squirrel on the programme, but it wasn’t readily available in the shops. By the time he had managed to get a gamekeeper friend to kill three, a BBC executive had stamped on the idea on the grounds that “squirrels cannot be seen to lose their lives for an entertainment programme”. Hmm… anyone fancy telling Gordon Ramsay that his shows have to be vegetarian from now on?)

In fact, a bit of a bandwagon effect has built up over the last couple of years. Even mainstream chefs are getting into squirrel; Marco Pierre White has come up with a recipe for squirrel with walnuts. But it’s generally agreed that there’s not much eating on them – apart from the back legs – so you’ll need several squirrels if you’re feeding more than two people with small appetites.

It’s surprisingly easy to find recipes for squirrel on the Internet. Many of them are American, as you’d expect; there’s even a recipe called Brunswick stew which has squirrel as its basis. But there are all sorts of other ideas out there. Besides the CAD idea mentioned above, there’s barbecued squirrel, tandoori squirrel, squirrel fricassée, squirrel popcorn; you name it.

Opinions vary on the taste. Descriptions we’ve heard have likened it to wild boar, rabbit, duck, something between duck and lamb…

…and guess what? A lot of people suggest that squirrel tastes just like chicken. (Sigh…)

9 Responses to “Help save Tufty… eat a grey squirrel”