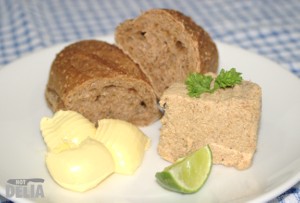 This vegetarian paté is great for canapés or even as a starter. The recipe was very popular with my friends too, but somehow I mislaid the book, apparently during one of our many house moves. I tried to recreate my own version of mushroom paté but it wasn’t really as good as the original and I’d pretty well given up on ever seeing that book again.

Then Mr ND’s Dad came round for a visit recently and he had a book with him. “Is this your book, by any chance?” he asked me. Adding that he’d found it in a cupboard in his house. It was my book that had gone missing about five years ago! Woo hoo! I can only assume that it had found its way into his cupboard during one of the times we were between houses and temporarily dumped some of our stuff at his place. You might wonder why I didn’t just buy a replacement. Well, the trouble was that I didn’t know the name of the book or who had written it, and it’s quite an old book anyway (published in 1985).

Anyway, let’s get on with this recipe without any further ado.

1. Melt half the butter in a pan with a lid and fry the shallots or onions and garlic gently for 3 minutes. Add the mushrooms, cover the pan and cook for 15 minutes. Remove the lid, turn up the heat and reduce the liquid until the mushrooms are just moist. Melt the remaining butter.

2. Cool slightly then put the mushrooms with the breadcrumbs, cheese, nutmeg, mace, salt, pepper and butter in a liquidiser or food processor and blend until smooth.

3. Check and adjust the seasoning, and spoon the spread into a small dish. Cover and chill for 1-2 hours in the refrigerator.

4. Just before serving sprinkle the top with parsley. Serve with lemon wedges.

(May be kept chilled for up to 36 hours, covered tightly with clingfilm to prevent the flavour permeating the other foods in the refrigerator.)

The paté in my photo looks quite a bit lighter than it’s supposed to because I couldn’t get the lovely Portobello mushrooms that would have given it the extra Kodak* and flavour. I had to use oyster mushrooms because that’s all I could get but I used my favourite cheat ingredient, Marmite, for a bit of a flavour boost.

For an extra texture and flavour twist, you can try my mushroom and hazelnut paté, or if you’re a confirmed carnivore, why not make a chicken or pork liver paté?

*Kodak – while I was working as a commis in a commercial kitchen a more senior chef ordered me to “Get some more Kodak on that!” It turned out that I’d not browned the dish enough and he wanted more colour. Love the expression. People sometimes say, “There’s nowt as queer as folk”. In my opinion, there’s nowt as queer as chefs.