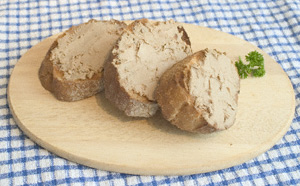 Nigel Slater’s book Appetite, which was Number 7 in my Top Ten cookbooks of 2008, has a simple recipe for a smooth and creamy paté. He uses chicken livers in his but I prefer pork liver paté so I adapted his recipe and pretty much made it the same way.

Nigel Slater’s recipe for a smooth and creamy paté

Trim any dark or green bits from the livers, cover them with milk. This will rid them of any bitterness. Soften two-thirds of the butter, not so far as to melt it but just so it takes a finger easily. Melt the remaining third in a shallow pan. When it starts to foam, drop in the livers, drained of their milk. Take care – they will spit at you. Let them develop a pale golden crust on one side then turn them over and do the same on the other. It is essential that the butter is hot enough for this to take only a few minutes, otherwise the centre will not stay pink and the paté will lose its magic.

There’s no point in copying all his instructions from the book so let me talk you through the rest of the process as I made it, more or less following Nigel Slater’s method. 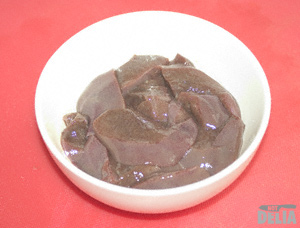 First of all, here I am making chicken liver paté with pork liver, otherwise my ingredients are the same.

The first thing I do is to trim off any boingy bits and remove any traces of the gall bladder. Then I sliced the liver into sizes comparable with chicken livers, as you can see in the picture. Then I covered the liver with milk and let it soak for about half an hour. 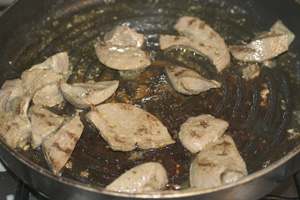 Next melt the butter in a frying pan, drain the milk from the liver and, when the butter is very hot, pop the drained slices of liver in. Fry quickly to get a nice browned texture on both sides. Take care not to overcook it or the paté won’t have that lovely pinkness.

The next step is to put all the ingredients (the liver, butter, and cream plus salt and pepper for seasoning) into a food processor and blitz it to make it as smooth as you can. Pour a glug or two of brandy into the pan which you used to cook the liver, bring to the boil and let the brandy soak up all the meat juices remaining in the pan. Pour the brandy and juices from the pan into the liver mixture and blitz again. 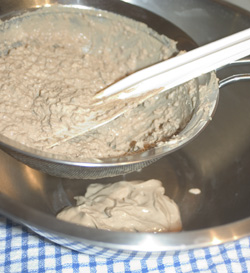 No matter how much you’ve blitzed the paté, there will still be some graininess, although it should still be pinkish.

You could stop there as you’ve already made the basic paté but in Nigel Slater’s words, “Now, using a rubber spatula, push the mixture through a stainless steel sieve into a bowl. I know this is deeply boring, and the sieve is yet another thing to wash up, but it really does make a crucial difference to the paté, turning the grainy and the mundane into the blissfully velvety.” 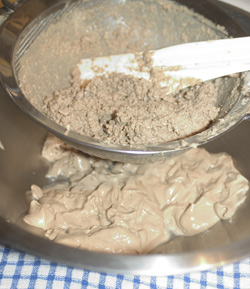 As you can see from the pictures, this process gives you a beautifully smooth and creamy paté, leaving the gunk behind in the sieve. It’s a rather tedious process but well worth it, so persevere! 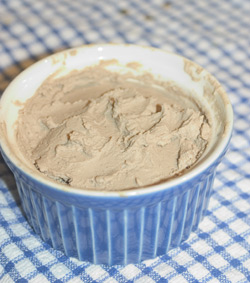 Now put the paté into a suitable dish. I used a large ramekin. Smooth the top and put it in the fridge to set.

Next you’re supposed to faff about with clarified butter to top it. I do this sometimes just for the appearance of the paté but I’ve found that it’s not really necessary. Cover with clingfilm to stop any discolouration. Scoff it up within two or three days – if it lasts that long.