I’m not a fan of cooking sauces, for several reasons. One reason is that they’re hideously overpriced for what they are. Another is that they’re usually chock full of additives – not just stabilisers, preservatives and colourings, stuff like salt and sugar as well. But the biggest reason is that I reckon I can generally make something better myself using my own ingredients. 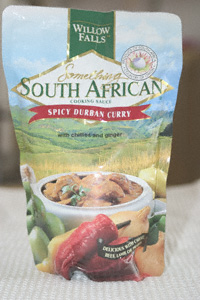 All the same, from time to time I see something on the supermarket shelves which catches my eye – something I’ve never tried before and which I think I might enjoy. So when I was shopping in Kuala Lumpur the other day and saw Willow Falls™ “Something South African” Spicy Durban Curry cooking sauce, I thought, hmm, why not? and slung a packet into the trolley. When we got home a few days later, I included half-a-dozen chicken thighs in the big weekly shop specifically for the purpose of making this curry. I generally find that chicken thighs are much tastier than chicken breasts and are especially good in a curry.

I had a go at making the curry yesterday. Looking at the package, it all seemed very easy; they give you instructions for making it on the hob, in the oven or even in the microwave if you’re that way inclined. I chose to follow the hob instructions.

Step 1 told me to brown the meat. Good start, I thought. Just bunging in the meat and hoping for the best is a widespread mistake – all the flavour is lost from the meat. If you’re going to do that, you might as well just use textured protein. They advise you to do it in a tablespoon of oil on a high heat setting for 1-2 minutes. I had been cooking streaky bacon (for a Caesar salad) the day before so there was lots of lovely bacon fat in the frying pan – perfect for the job of browning and adding flavour to the chicken thighs.

Then came Step 2. “Stir in cooking sauce and bring to the boil.” I snipped open the packet and poured in the contents. Urggh! A gloopy brown liquid came flowing out. Not very appetising-looking. Oh well, maybe it would look better once it warmed up. 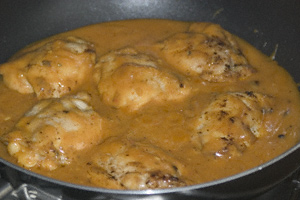 “Cover and simmer on low heat.” I was using my wok, and don’t have a suitable-sized lid for it. “For thicker sauce, remove lid for last 10 minutes.” OK, we’ll have an extra thick sauce…

I tasted it. To my disappointment, it was a pretty run-of-the-mill curry sauce, with little to distinguish it except a mildly unpleasant bitterness and saltiness that made it rather unbalanced to my palate. I didn’t fancy it but Mr ND was game to try some for his lunch. He wasn’t too impressed either – after he’d eaten about a quarter of it, he commented, “It’s a bit salty.”

I wouldn’t bother getting it again. This isn’t just prejudice against ready-made sauces – there are some that I’ve used, enjoyed and bought again. But this just didn’t do anything for me at all; I’d rather make my own.