Do you find yourself struggling to wade your way through restaurant portions?

I know I certainly do. Time and time again I’ve really looked forward to going out for a meal, only to find that the mountain of food that’s been piled on my plate is so daunting that I lose my appetite. 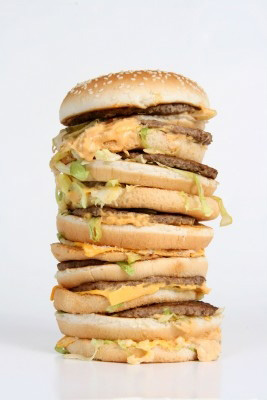 That’s part of the reason why I feel more comfortable going to buffet meals. Not only do I generally get a far wider choice of dishes than if I’m going to a conventional restaurant – why limit yourself to one cuisine when you can choose from half a dozen or more at once? – but I can also decide exactly what, and how much of it, goes onto my plate. It means I get properly fed (I actually eat more than when I’m confronted with a heaped plate) and less food gets wasted too, which should keep environmentalists and proprietors happy.

But my restaurant choices shouldn’t have to be limited in that way.

Apparently food bills are up by 12% over the last year. At a time when most of us are feeling the economic pinch to some extent, why not keep prices the same and reduce portion sizes instead? Considering how much we’re being told that the nation’s too obese and we should all eat more healthily – which largely means eating less – the logic of smaller portion sizes seems inescapable.

Even more so when you consider that many scientists believe that current Western-style intensive agriculture isn’t sustainable. Advocates of organic farming, including the Soil Association, point out that producing artificial nitrate-based fertilisers uses vast quantities of fossil fuels, drawing on the planet’s already heavily depleted reserves.

Unfortunately, it seems that most people’s eyes are still bigger than their bellies. Some restaurateurs have toyed with the idea of reducing portion sizes as many of their patrons fail to finish what is on their plates – only to be met with howls of protest from those same patrons.

On the other hand, there are restaurants that serve “child-sized” portions – but only to children. Even when the customer explains that they’re small eaters, they’re on a diet, they’ve been ill… and many older people eat less anyway. (In some countries, apparently, it’s possible to get “senior” portions. Never heard of it here, though.)

Let’s hope that the credit crunch makes these ridiculously inflexible restaurateurs think again – and leads more of them to give us the option of smaller portions. Meanwhile, I suppose I’ll have to stick to buffets when I’m eating out.