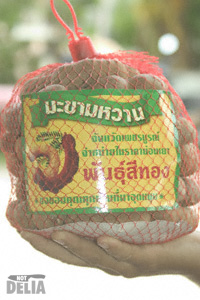 We went down to our local market to buy tamarind, which apparently is essential for making some Indian dishes, such as prawn pathia, as well as being fairly commonly used in Thai cooking.

There’s an interesting article about cooking with tamarind here – which I would have been better off reading before going to the market rather than after! 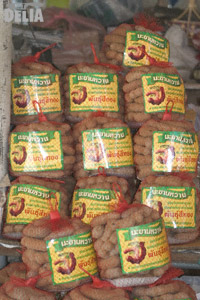 I had a feeling that we were getting the wrong thing, but with nothing more obviously on offer and language barriers too high to overcome we bought a bag of the stuff. Here’s a photo of bags of the stuff on prominent display at the market. 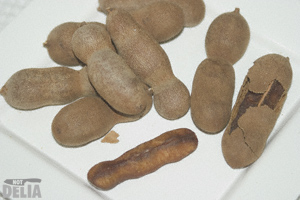 And a close up of the pods themselves. There’s also a close-up of the bag itself at the top of the page.

On the way home, we decided to have a pit-stop at our favourite local bar to chill out before resuming the journey home with the heavy bags of fruit and veg.

With the friendliness that’s characteristic of the Thai people, they wondered what we’d been buying and whether we’d got any typical Thai ingredients.

It soon became apparent that we had bought the wrong kind of tamarind. There are two types available – sweet for eating, and sour for cooking. If we wanted the stuff for cooking then we should’ve got the sour.

No matter. Someone went off straight away to get the right stuff for us. I said that we hadn’t seen the right stuff at the market. “Oh no,” they said, “you have to ask for the sour tamarind. It’s not usually on display.” 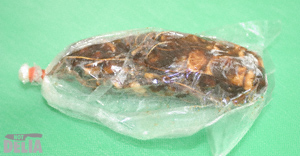 Here’s a photo of it. As you can see, it comes ready peeled in a small plastic bag and is ready to use. This cost about the equivalent of 10p.

After we’d had a couple of drinks each in the bar, the Thai bar owner then took our heavy shopping bags home for us on her scooter so we didn’t have to carry them. All in all, it was a good afternoon out.

4 Responses to “Two Types of Tamarind”