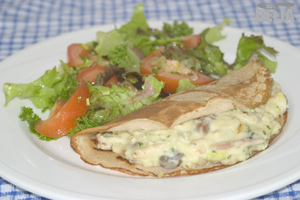 I posted a recipe for buckwheat pancakes recently. These are lovely savoury pancakes which I stuffed with a filling of bacon, mushroom and leek in a parsley and mustard sauce.

This is a very quick and easy recipe to make – especially if you have a few buckwheat pancakes already stored in the freezer. They only take a few minutes to defrost and reheat.

In addition to the pancakes, you also need a white sauce, for example simple white sauce, parsley sauce, or béchamel sauce. I made a parsley sauce and added a teaspoon of Colman’s mustard which made a tasty base for adding the other ingredients.

(No strict measurements here as the poll on the left hand side suggests that very few people measure anything anyway. ;-))

First start sweating off the leek and garlic in a suitable pan. Meanwhile snip the bacon rashers and add them, then the sliced mushrooms. 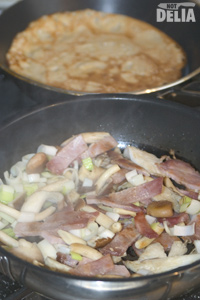 You can see them sizzling away in the photo. As you can see in the background, I’m cooking the pancakes at the same time.

Once the leeks, bacon and mushrooms are cooked, add them to the sauce you prepared earlier. Make sure everything is nice and hot. Put the filling inside the pancake and serve. And that’s it! What could be easier? I served mine with a side salad and this is sufficient for lunch or a tasty snack.

Other suggestions for fillings

Swap salmon or smoked haddock or cod for the bacon. Delicious!

Leave out the bacon and add something veggie instead such as tomato or asparagus. You could also use a cheese sauce as the base for the filling.

Erm, only eat a half portion?

By the way, if you’re a fan of Colman’s mustard, here’s an article about its history.