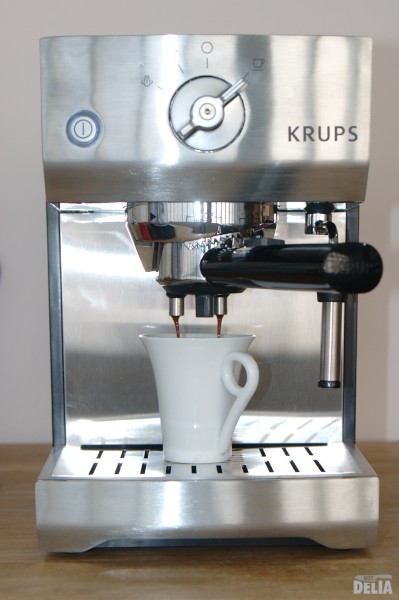 Those of you who’ve already read my post about steam versus pump espresso may have guessed that I was leading up to a product review. Yes, Not Delia agreed that I could go out and buy an espresso machine to replace Old Faithful the Morphy Richards steam-powered machine which, to be honest, was starting to give off more steam around the filler cap and filter basket holder than it was using to push coffee out.

There was a fairly bewildering choice of machines in the various department stores, with plenty of big names represented including DeLonghi, Gaggia, Krups and even Electrolux. In one of them I even saw a monster of a hand-pull machine which would have done any café proud but might have dwarfed our relatively modest bar. Lots of the pricier machines offered a host of fancy facilities. But in the end I settled for one of the cheaper models on offer – the Krups XP5240.

It’s a trim little thing, standing exactly a foot tall (30½cm – I measured) and taking up less than a square foot bar space. (Heavy for its size, though – I had to pick it up to position it for the photograph, and was surprised by the weight, although then again the water tank was nearly full.) So it’s not surprising to find that it doesn’t do a great deal other than make coffee. Many of the more expensive machines allow you to set the measure of coffee you want to make – from a little 20ml thimbleful up to a decent-sized 220ml breakfast cup in the case of the XP5240’s cousin, the EA8010 – and will grind the beans freshly for you, measure out the water, dispose of the used grounds and even self-descale.

But on the other hand, who needs all that stuff? It’s not as if ND and I are in the café business. Actually, so far it’s only been me drinking the coffee anyway. And for the sake of two or three cups a day, the more expensive machine wouldn’t exactly be saving vast amounts of labour. (And it’s two-and-a-half times the price.)

Besides, the XP5240 is quite easy to use. Its water tank holds just over a litre, enough for four or five days in my case. The filter holder is nice and chunky, unlike the Morphy Richards thing, and doesn’t have a fiddly basket – instead it has a little button on the bottom which you can use to push out the used cake of grounds. And there’s a clever ratchet system which automatically tamps the coffee to the required degree of firmness. (You can also use it for soft pods of coffee or ESE (“Easy Serving Espresso”) pods.) They even give you a guide as to where you should be turning for one or two 50ml cups. Our cups, as Sod’s Law dictates, are 75ml in size, so I usually end up in between the two ranges. Still works, though.

And there aren’t a whole lot of confusing buttons to push and knobs to twiddle – just an on/off switch and a knob with three active positions. Two of them are used for making cappuccino, which I haven’t got round to yet. The third activates the pump. Switch it on, and a brief three-second growl from the pump primes the coffee – followed by a pause before the pump starts its work in earnest. Out flow two streams of the precious liquor. Up to you whether you make two cups or one, as the streams are close enough together to go into a small cup but wide enough apart to go into two quite thick-rimmed cups too.

Most importantly, how good is the coffee it makes?

So far I’ve tried with two different brands. One was a fairly bog-standard brand and had been in the fridge for several weeks. But it was still markedly better than with the steam-powered machine, with considerably more crema (the frothy stuff that ranges from a pale beige to a medium tan) and more complexity – and without the wateriness I’d noticed before.

The other was a brand of organic coffee which we found on special offer in Singapore (it was approaching its “best before” date). It smelt wonderful (and still does – I haven’t finished the pack yet!) while it was being prepared, and was beautifully smooth, with the pleasant bitterness you expect from a good coffee and none of the harsh, “boiled” bitterness you don’t want. And towards the bottom of the cup, along with the usual coffee taste there were a whole range of fruity notes that the steam machine would never have released.

So it’s fair to say I’m delighted with the new machine (Update: but see Comments 4-6 below about the steam nozzle attachment). And, having saved all that money buying a simple model rather than an all-singing-all-dancing one, I’ve still got plenty left from my budget to go out and buy a burr grinder. But that’s another story. 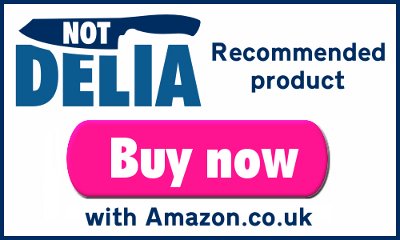 18 Responses to “I’ve got a silver machine…”