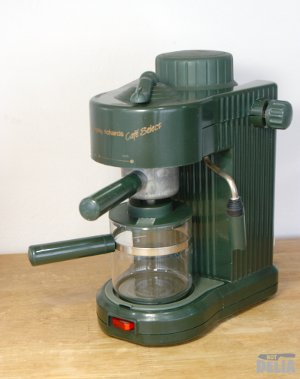 When Not Delia and I moved to our new home in London in the late 1990s, naturally we needed to equip it. Out went the old owner’s infra-red hob, and in came a new gas cooker – with an extra free gift, a Morphy Richards Cafe Select espresso machine. (Not only that, but the espresso machine came with its own free gift, a bag of espresso coffee. We were mildly disappointed to find there wasn’t a free gift with the coffee, but you can’t have everything.)

Considering it only had a two-year guarantee, it hasn’t done bad service – we’ve used it in three different countries and have been broadly pleased with the results. Or rather, I have. Not Delia likes espresso, but it does tend to make her ping off the walls for a couple of hours after she’s drunk it. We’ve tried decaffeinated ground coffee, but the flavour’s never matched the non-treated coffee for aroma and taste. Still, she has the occasional cappuccino.

You’ll have noticed that I slipped the word “broadly” in front of the word “pleased” in the last paragraph. Regardless of the type of coffee used (I even bought a tin of Illy once) the results never seemed to come up to the standard of the espresso you’d expect in a café. I wondered why that was, so I did a bit of research.

Apparently the answer is that there are basically two types of espresso machine. Both of them force water through finely ground coffee under pressure, which is why it’s called espresso – from the Italian word meaning expressed or forced out. But one type uses a pump (an electric pump or a hand-pulled piston) to do it, while the other type boils the water in an enclosed space and relies on pressure from the steam created to force the water through.

The steam pressure type (of which our Morphy Richards machine is one) is cheaper to produce and has fewer working parts to go wrong. You can get small jug-sized ones (the Italian sort – Bialetti are the best-known brand) that can go directly onto the stove-top and have no moving parts at all – you do have to put the parts together and screw the base onto the top to assemble it, but that’s easy, and there’s very little that can wear out apart from the rubber seal, which is replaceable.

So why bother with the other type? It’s all a question of temperature and pressure.

Views on the ideal temperature for espresso-making vary slightly, but the general consensus is that the water should be in the low 90s Celsius. (There’s even a chain of coffee shops in Thailand called 94° Coffee in recognition of that.) 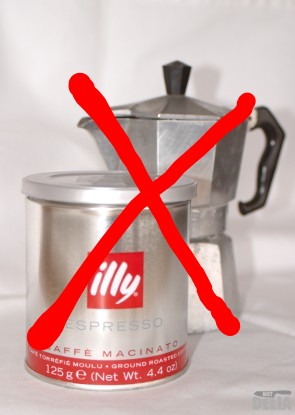 However, water normally boils at 100°C – except when it’s under pressure, when the boiling point is even higher. So espresso makers that rely on steam pressure typically use overheated water for the brew. You can try and prevent that happening by turning off the heat when the water starts to flow, but it’s a fine art and in my experience doesn’t work very well anyway.

Not only that, but the pressure developed by a steam-driven espresso machine is never more than about 1.5 bar – in other words, one-and-a-half times normal atmospheric pressure. Pump-driven machines use far higher pressure, typically 9 bar or more, literally squeezing out more of the soluble substances that give the coffee its flavour.

So, as I belatedly discovered, it’s a waste of money to put expensive coffee in a steam-driven machine. Which is why I’ve drawn a big red X across the photo on the right here.

If you’re desperate for good espresso at home, you’ll need to buy a machine that has a pump, like this one. But you don’t have to buy an elaborate one with pressure gauges and a great big handle to pull to force the water through with a piston – unless you’ve got the best part of a couple of thousand quid to play with.

Electric pump-driven machines are available from about £100 if you shop around. Be careful what you buy, though. Some of the cheapest of these machines only work with pre-packaged coffee pods, so what you save on the machine you’ll end up paying in premium prices for one particular manufacturer’s coffee.