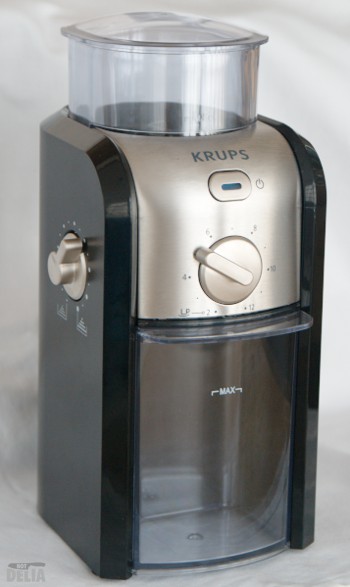 If you’ve read my review of the Krups espresso machine Not Delia let me buy last month, you’ll see that I kept well within budget and had enough over to go out and buy a coffee grinder.

There are basically two sorts of coffee “grinder” out there. One has blades and chops the beans up into lots of little pieces – so technically it doesn’t actually grind the beans at all; it’s more like a mini food processor. The other, known as a burr grinder, has two lined faces, one fixed and one rotating, and crushes the beans between the two.

What’s the difference? Well, there are a couple.

The blade machine is almost invariably electrically powered, whereas the burr grinder may be electric or hand-cranked. Blade grinders are significantly cheaper than electric burr grinders – in fact, you may already have one of sorts if you have a food processor.

However, all other things being equal, the coffee produced by a burr grinder is likely to produce a better result. Blade grinders generate more heat through friction, thus losing some of the flavour. And they also produce less evenly sized grounds, which is not so much of a problem for filter coffee but is likely to mean a weaker taste if you’re making espresso.

It’s possible to spend up to three or four hundred quid on a grinder, but the one I got – the Krups GVX 2 – was a fair bit less at about £70. It’s an easily operated machine for the most part: just two dials (one for selecting the fineness of the grind, the other for the quantity) and one button, which starts the wheels going (they stop automatically) and lights up to show you it’s working – a bit unnecessarily, as the grinding noise gives quite a good indication of that!

Otherwise, it’s a nice piece of kit. And, together with the espresso machine and real beans, it’s producing some of the best-tasting coffee I’ve ever had anywhere.