When we’re in Kuala Lumpur, a lot of my restaurant reviews tend to be about somewhere we’ve revisited. I guess everyone has their tried and tested favourites, so if we find somewhere we like then we do tend to go back. To be honest, despite all the tourist hype about KL being a Paradise for foodies, I’ve always much preferred Bangkok for its variety and quality of places to eat – many of them inexpensive too.

I’ve not been hugely impressed by Time Out KL‘s recommendations either. The last time we tried one of their highly recommended places, the Jogoya, I only rated it 3 out of 5. The Magnificent Fish & Chips Bar didn’t fare any better either.

However, it was our last night there and I was determined to try something new. I was uninspired by TOKL‘s latest recommendations so I headed over to TripAdvisor to see what people on there might be saying about KL restaurants. Hey! Looks like some newcomer has gone straight in at number one. That’s definitely worth a closer look. Ooh, modern British and non-halal. Can I really be the only Brit who isn’t excited by the thought of beef bacon, turkey ham, and chicken sausages? Gimme a bit of real pig any time (although bizarrely I choose a beef dish for my dinner at Albion).

Albion is a “modern British” restaurant and bar. I wasn’t exactly sure what that might mean. Perhaps high-falutin’, show-off cheffy stuff, or other food which is designed to impress but doesn’t really satisfy? But reading the other reviews and learning more about the menu, I quickly realised that this wasn’t going to be some kind of pretentious place at all. That settled it. We jumped in a taxi for the short drive from KLCC, where we were staying, to the social hub of Bukit Bintang.

It’s difficult to pigeon-hole this restaurant. It’s unique. The closest I could get to describing it would be a sort of cross between pub grub at its ultimate best and fine dining. A little more expensive than the average pub meal, but certainly not in the take-out-a-mortgage-to-eat-here category of many fine dining establishments. They have a seriously impressive wine list too. Maybe more than 60 wines available with an incredible variety of New World and Old, perennial favourites such as Cab Sauv and Sauv Blanc, and also lots to pique the curiosity of any wine lover. There was a good range of prices too. We were aware that we needed to be up early for our flight the following morning so we didn’t indulge this time, and stuck to gnat’s piss, aka local lager. Definitely wine next time, though!

There are two bars, one upstairs, and one down. We sat outside downstairs as is our usual preference in most places. The ambience was very pleasant, with no blaring music (nor Richard Clayderman). The staff were keen to please and helpful but not over-attentive (a Good Thing). We settled down happily enough to enjoy our meal.

But what meal? As we studied the menu, first up was a list of five brunch items, including such favourites as Eggs Benedict (either single for RM16 or double for RM24) and Eggs Royale (a slightly more expensive variant involving Norwegian smoked salmon). They also encourage you to recover from the night before with a Bloody Mary. Yes, this sounded like my kind of place. (There’s a notice on the blackboard by the entrance saying that brunch is available all day – but I only saw it halfway through dinner, otherwise I might well have ordered one.)

The list of starters was pretty impressive too – seared scallops with pumpkin purée and roasted cauliflower sounded pretty good, as did asparagus with poached egg and black truffle with blue cheese sauce. Even the less ambitious starters like calamari with sweet chilli sauce sounded inviting. However, we weren’t hugely hungry and were well aware from the Trip Advisor reviews that the main courses were likely to be hearty helpings.

Mr ND had the slow roasted pork belly, which was superbly cooked – a generous roll of juicy, almost white meat, with just a hint of crispiness at the edges to give it that extra flavour and texture experience. The fat (and if you’re eating pork belly, you know there’s going to be fat) was virtually liquid, oozing beautiful porky taste and mouthfeel into every forkful. Inside the roll was a rich, nutty stuffing; all mounted on a base of potato and leek which complemented the pork to perfection, as did the gravy and the curls of deliciously caramelised apple. The whole lot was topped off with two crunchy pieces of crackling – crunchy, but not tooth-breakingly so. And, as you can see in the photo above, the ensemble was beautifully presented – a generous meal without daunting by its size. 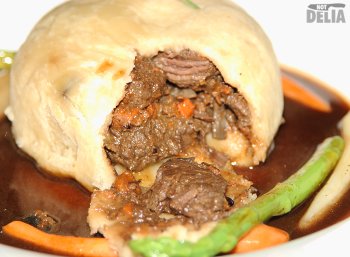 Despite having a penchant for porcine preparations, I opted for the steak and Guinness pudding. Pudding! You can get a steak pie in many places but a suet pudding was too much to resist. And it was delicious. It was also beautifully presented but I sliced into it to let you see what was inside, rather than get an arty-farty photo. The meat was very tender and absolutely not dry at all. I don’t know where they got the beef from or how they cooked it, but it’s one of the rare times we’ve been able to get such skilfully cooked and tender beef like this.

The steak and Guinness pudding was really excellent. I would recommend it to anyone. The pud was served surrounded by a moat of rich, beefy gravy. I love good gravy! And the vegetables were perfect too. I usually leave the veggies we get served in restaurants, but I scoffed these up. They were fragrant, a little bit crunchy and beautifully cooked. Modern British? Don’t over-cook the veg! Albion has got it just right.

Having enjoyed such a wonderful meal, I was curious to know who was behind the venture so I asked one of the staff if it would be possible to speak to the owner for a few minutes. James was happy to oblige – he co-owns the place with his partner, Colin, and gave much of the credit to Colin for several of the things we admired. James was terrific company and a real pleasure to talk to. He’s very amusing in a quiet unassuming way. After a few minutes it was just like chatting to an old friend, he really has a knack of getting along with people. (Don’t tell anyone but I got the impression he wasn’t a Delia Smith fan either.) He’s my kind of guy!

In conclusion: it’s a bit of a long restaurant review but we were seriously impressed both by the restaurant and by James. The ambience, staff, presentation, quality of food, menu of food and drink, personality of the proprietor, everything really, was superb. As long as they can keep up their standards, and there’s no reason to think they won’t, this place is going to stay as one of the best places to eat in KL.

And don’t be at all surprised to see a new review about Albion revisited some time soon.