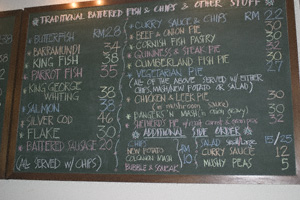 We bought the March edition of Time Out Kuala Lumpur (TOKL) magazine, which included a listing of KL’s best eateries. (Hmm. I wonder how they define “best”, as we were somewhat disappointed after following their advice.)

Listed under the ‘Western’ section was The Magnificent Fish & Chips Bar. Here’s what TOKL had to say:

Chippies might be pricey but the food quality makes up for it. Though it might not hold a candle against the world’s best, as some might argue, it is one of the best in KL. If fish & chips don’t do it for you, order up some curry and chips for a local flavour. For a more hearty meal, try the Cumberland Fish Pie or Roast Cod. Do save space for dessert as well. This is one of the few joints in Changkat Bukit Bintang that’s open late on weekends for that late night snack.

Well, that sounded pretty good so we headed off to Changkat Bukit Bintang, which was just a couple of hundred yards or so from our hotel.

It looked like a nice place with attractive wooden tables and chairs with seating both inside and out. We’d planned to sit outside but when we realised that the indoor part of it was open, rather than being enclosed, and there was no a/c inside, we decided to sit in instead. We both dislike the refrigerated atmosphere of restaurants with over-cranked up air conditioners.

We also noticed the ashtrays on the tables – no problem for smokers, then. Another plus point for me!

There was also a TV with a football match on, which might appeal to some people.

There was a pleasant atmosphere, neither busy nor deadly quiet, and the music (from a radio station?) was OK and not blaring at the deafening volume you so frequently find elsewhere. We knew from the TOKL feature that this meal was going to be on the pricey side, but it looked like a good place, and Mr ND was grumbling about being hungry, so we decided to give it a go. 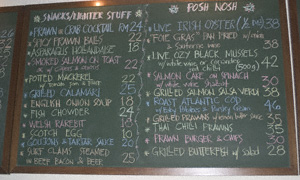 Having read other food blogs to find out more about the Magnificent Fish & Chips Bar before setting out, we’d known not to expect menus. Everything is written on the blackboards inside – breakfasts, snacks, posh nosh, traditional battered fish, other stuff, desserts, booze specials, red and white wine lists.

We thought this was a great idea as it made for a more flexible menu according to the seasons and the availability of fish. I remarked to Mr ND that it was a much better idea than having a fixed menu where you order something only to be told “No have” by the staff.

Unfortunately this proved to be a wrong assumption. It was “No have” for the first few of Mr ND’s choices, and the chalk on the blackboard appeared to be fixed rather than updated to reflect the current availability of the dishes. There is, however, a blackboard on the pavement which appeared to offer daily specials.

To be fair we were there quite late and most likely the more popular choices had already gone. It’s good that the restaurant doesn’t over-order its food purchases, that way you can be sure that the food is fresh. Mr ND had been craving traditional battered fish and chips but his only choices were butterfish or cod. Having researched earlier, I’d discovered that the cod would be silver cod – something I’d not heard of before, and haven’t been able to identify since.

The cod was very expensive but since it was to be a new culinary experience – and Mr ND is worth the expense – we ordered the cod and chips, which at RM46 (£9.00) was the most expensive dish on the menu. 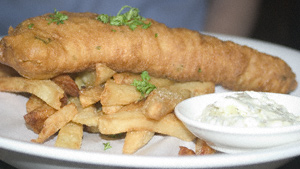 For some reason Mr ND decided he wanted curry sauce with his cod and chips. Apparently this is an English tradition. It sounded revolting to me but, what the heck, he had curry sauce too.

He regretted his choice, though, as it wasn’t at all what he expected. It turned out to be a very salty chicken curry, brown in colour rather than the traditional yellow chippie-style curry sauce, and without a sultana in sight. 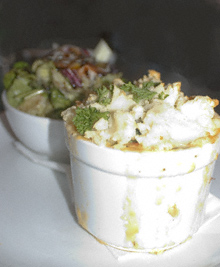 Meanwhile, I ordered the Cumberland fish pie, which came with a choice of chips or salad. I chose the salad figuring I could pinch some of Mr ND’s chips and if we needed more we could always put in an additional side order.

The presentation of both meals was beautiful! The cod and chips came on a large plate lined with newspaper, with greaseproof paper on top. And the fish pie and salad also looked extremely attractive.

Well, it all looked great, but what of the taste of the meal?

The fish (silver cod) was nice and tasty, with big white flakes, although the portion wasn’t very large. The batter was a bit disappointing, being somewhat processed-looking. It didn’t seem to stick to the fish either, which was a bit weird.

The chips were good, although there weren’t very many of them. They also came ready salted, which was OK, but I’d have preferred to choose how much salt to add myself – and indeed whether I wanted salt at all or not.

The fish pie had a nice sauce and plenty of fish – salmon and some unidentified tasty, white fish, and a prawn, but the fish pieces still had the skin on so Mrs Picky had to pick them out and remove the bits of skin before eating them. I’ve never had a fish pie with unskinned fish before and I didn’t fancy the idea of trying that particular new culinary experience.

The mash on top of the pie looked lovely and I was looking forward to scoffing it, but that too was a disappointment. It tasted as though it had been frozen and reheated. Really not a nice taste at all.

The salad was great, as nice as I’ve had anywhere, and included salad leaves, roasted green and red peppers, tiny halved tomatoes, and a lovely dressing, which I assumed was balsamic based.

These included a bottle of Sarson’s malt vinegar, HP sauce, Heinz Tomato Ketchup and Lingham’s Chilly Sauce. No complaints there. There was also a nice tartare sauce – which tasted home-made – with the cod and chips, as well as a nice fresh slice of lemon. 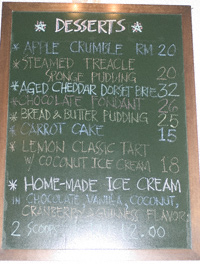 There was a good range of desserts but we didn’t try any.

We had a couple of pints of Guinness each. I’d not noticed the price and was a bit shocked to discover the price of them afterwards – about £6.50 a pint! Urghh!

There were other drinks on offer, again all listed on the blackboard. There were five red wines by glass or bottle, and four white. My impression was that they’d been intelligently chosen by someone who knew their wine, and there was a good, broad selection.

The staff were friendly and helpful. They were clean, courteous and efficient. Just what you’d expect from a fairly upmarket place really.

Well, we knew we weren’t in for a cheap night out but even so were rather taken aback when the bill came. We’d had fish and chips, a fish pie, and two pints of Guinness each. It came to RM208.

(Despite the service charge, we still felt obliged to tip the staff for their good service – that’s definitely a topic for another posting.)

Overall rating: 3 out of 5 – if VFM had been better, 3½ out of 5
If this is among the best KL has to offer I’m not surprised we prefer Bangkok. Magnificent Fish & Chips? Magnificently over-priced perhaps. It was pleasant but the experience was a far cry from magnificent.