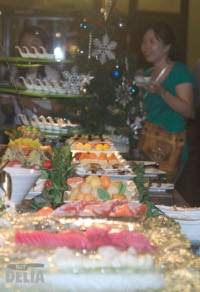 Recently, we thought we’d have another go at eating at one of Time Out Kuala Lumpur‘s recommended restaurants – after all, their December edition’s listings were based on readers’ votes rather than their own reviews, so perhaps we’d have more luck than we did back in March when we visited the Magnificent Fish & Chips Bar on Time Out‘s recommendation. I fancied Japanese and Mr Not Delia seemed happy enough with that, so we decided to check out one of the finalists in the Japanese section, the Jogoya Japanese Buffet in the prestigious Starhill Gallery shopping mall.

We got to the Starhill Gallery easily enough, but it took us quite some time to get to the restaurant. For one thing, there was tight security on the entrance and we had to get visitors’ passes – apparently there was some kind of exhibition going on organised by the numerous watch and jewellery shops in the building. After we’d negotiated that, we then had to find our way to the Relish floor.

(One of the ways in which the Starhill Gallery lets you know that it’s a prestigious place is that its floors are far too grand to have numbers – they have names instead. And there’s nothing obvious on the floors themselves to let lesser mortals know which floor they’re on. Presumably you have to be a frequent visitor, and thus one of the in-crowd, to know which floor is which. Very elitist. Anyway, the Relish floor is second from the top.)

We were too early for the dinner buffet starting at five o’clock, so we had to kill about half an hour before re-presenting ourselves at the entrance at about three minutes to five. Still too early, so we and another unfortunate couple found ourselves doing a quick jog around the Relish floor to kill another five minutes. Finally at two minutes past five we were ready to pay and go in. (The Jogoya’s way of doing things – pay first, then eat.) Incidentally, it cost £36 for the two of us – not bad by UK standards, quite expensive compared with typical SE Asian prices.

The Time Out feature described the Jogoya as a labyrinth. It didn’t look that much like one from the outside – we saw a few stands and a reasonably large number of tables. However, once you’re inside it becomes clear that it’s a much bigger establishment than you’re easily able to tell by looking through the windows. A quick wander around became a much slower wander round as we found more and more different stations with a wide choice of dishes.

However, it’s not as Japanese as you’d think from a restaurant that describes itself as a “Japanese buffet”. Sure, the sushi and sashimi are the first thing you see when you get through the door. And there are other Japanese things on offer too, like tempura and noodles. But many of the other things have a decidedly Chinese, Malay or even Thai slant to them – and it came as no great surprise when we read on the Jogoya’s website afterwards that it’s the first overseas venture of a Taiwanese chain. (Time Out made a big thing of the “freeflow Thai coconuts”. Perhaps we should have taken a hint from that as to how Japanese it was going to be.)

The buffet price includes “freeflow” (unlimited) drinks, including various pre-mixed cocktails and red and white wine as well as soft drinks and various teas and coffees. However, the bar is down at one end of the restaurant a considerable distance away from where we had been seated. Mr ND went and fetched two glasses of white wine for us and was given two small glasses (roughly the 125ml size), filled barely half full. It wasn’t very nice wine – too sweet – but drinkable at a push.

After those thimblefuls were emptied (which, not surprisingly, didn’t take long) I asked a waitress if she could bring us two glasses of wine to save us the expedition. She looked aghast at the idea, but she did it and had the sense to fill ’em up so she wouldn’t have to repeat the process five minutes later. From then on we gave up the struggle as it was proving too difficult to overcome the waiting staff’s unwillingness to fetch and carry.

We also had a struggle with the waiting staff when it came to removing plates. For instance, I like to have a debris plate handy somewhere on the table where Mr ND and I can discard shells, skins, boingy bits and other stuff we don’t intend to eat and don’t want cluttering our dining plates. Now, while I’m quite happy for that plate to be removed at intervals – they can fill up quite quickly if you’re eating shellfish, for instance – I don’t like it being swiped away when I’m just about to put something on it.

Nor do I like it when a busybody comes and tries to remove a dish that I haven’t even started eating yet, let alone finished with. The Jogoya’s plates aren’t big – they’re about side-plate sized. To save time (for reasons which will become abundantly clear later) I’d taken two plates back to the table, one of which held a single oyster. I was in the process of eating from the other plate when I was interrupted by a waitress trying to remove the oyster – which was clearly untouched, as she’d have seen if she’d taken a moment to look properly.

The Jogoya has a system where certain stations preparing cooked dishes have glass bowls, each marked with the name of a different dish – you order by dropping a silver bulldog-clip type of thing with your table number into the appropriate glass bowl, and they bring it to you. Some of the things we ordered that way were very tasty, including a Golden Nippon fish and a prawn sambal (a Malay speciality).

The “serve yourself” counters were a good deal more hit-and-miss. Mr ND had some fun with a table-top “cook your own beef bulgogi” – fired by a small gas canister Primus stove type of thing – which he found reasonably tasty. And I very much enjoyed the oysters with XO sauce and bean thread fried noodles – although not the noodles as they’d clearly gone soggy in the meantime from being on display for so long. Another oyster dish, however, came with a lasagna-style sauce and was stone cold, which was a rather unpleasant surprise. And the “fish and chip” was a weird breaded goujon of fish.

The biggest annoyance, though, was the feeling that the whole meal was a race against time. The Jogoya imposes a strict time limit of two hours on its diners, which jars badly with its claim that its mission is “to serve you just like you are our family member returning home for meal” and that “we are absolutely not afraid if you eat too much”.

It’s perfectly possible to have an enjoyable buffet experience in two hours – Mr ND and I are usually winding up after about an hour and three-quarters anyway. The E&O buffet at Sarkies Corner is a good example of how a buffet can wind down gracefully – the evening’s over, but you don’t get chucked out of the door at the end of service.

There was no grace about the Jogoya. It was more like a canteen where you didn’t feel as if you were enjoying a dining experience. It was more like being processed through a sausage machine. Knowing that you’re eating to a deadline spoils the enjoyment – you feel that the clock’s always ticking, that they’re anxious to get you off the table to get another set of punters in, and that you have to make the most of your limited time.

I made the most of my limited time by maximising value – which entailed repeated visits to the fresh oyster bar towards the end of our two hours. OK, I like oysters, but I probably wouldn’t have had as many as I did if I’d had the leisure to eat what I wanted at the pace I wanted. (As it was, I was only taking one at a time. I hate buffet waste.) They were good oysters, though, and served by a very helpful young chef on the station. On my final visit there were none left, presumably because other diners had piled their plates with them, and probably more than they’d ever eat, I bet. When I told the chef of my disappointment, he very kindly hoiked out three more beauties from the next batch which hadn’t been set out yet. (I still only took one, though.)

On the way out I wanted to take some photos, but was asked politely by a member of staff not to – photos at the dining table were OK, but not of the displays of food. Which I suppose is fair enough – if everyone’s swarming around photographing every station, it’s not very pleasant for the people trying to serve themselves. So the one above is the only one I managed to take.

We are frequently disappointed by eating out in Malaysia and in KL in particular. I guess this is just yet another example of that. Some people rave about Malaysia dining but I think it simply doesn’t match up to neighbouring Thailand. (Perhaps more about that later.)