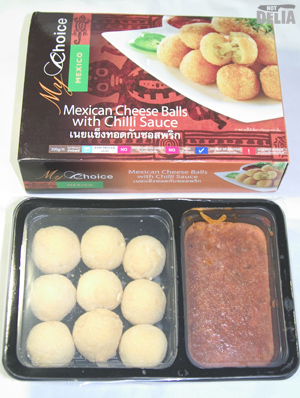 Several years ago we used to enjoy a pub snack called Dyna Bites. These snacks, by McCain Foods, were breaded cheese balls with finely chopped green chilli inside to give them a bit of a bite. Deep fried and served with a tangy tomato-based dip, they were very tasty to nibble along with a glass of cold beer. I’ve since made similar at home with varying results, so when I saw these Mexican Cheese Balls with Chilli Sauce, by MyChoice, nostalgia kicked in and I just had to have them.

As you can see from the photo, the box looked attractive enough so, although they were relatively expensive at just over £3, we thought, what the heck. It’s not the sort of thing we’d buy every day so we might as well try them for a change.

The first disappointment came when we opened the packet. Nine tiny balls the size of a grasshopper’s cojones. Do grasshoppers have cojones? I don’t know, but at least grasshoppers are tasty (if you peel them properly first). But we’ll get onto the taste later. The nine tiny balls were accompanied by a great wodge of tomatoey gloop.

Absolutely awful. Most of the balls appeared to be somewhat lacking in filling. It’s not very pleasant to eat empty spherical cases of processed fried breadcrumbs. Where there was filling present it was vile. It’s hard to describe it – a sort ikky smear of tasteless cheese is about the closest I can get. And the dip, which had been supplied in an over-generous proportion, to make up the weight presumably, was a cloying, over-sweet, gunge. Most of this product went in the bin and I certainly would never buy it again.

These were manufactured for Central Food Retail Co, Ltd, which is part of the Central Group, a family-owned Thai conglomerate. Really, with their resources, one might expect them to do a bit better. By the way, they also own the Centara Hotel chain – we ate recently in the Ginger restaurant in their Bangkok Centara Grand.

And now for something completely different. Please don’t forget to enter our Blurb photobook competition. All you have to do is to say why you deserve to win. You can sort out your photos in your own time afterwards. Please do have a go so we can attract more prizes in future for Not Delia to give away.
Publish your own coffee-table book with a Blurb prize! (Hurry – closes 31 May!)