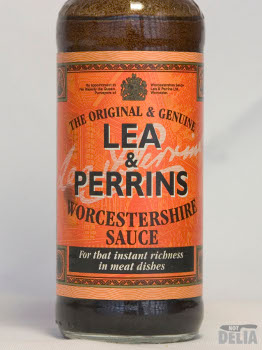 I’m currently reading The Raj At Table by David Burton (book review coming soon when I’ve finished it). It’s full of social history and interesting snippets. One of which is the story of Worcestershire sauce.

Despite its name, Worcester sauce was originally an Indian recipe, brought back to Britain by Lord Marcus Sandys, ex-Governor of Bengal. One day in 1835 he appeared in the prospering chemist’s emporium of John Lea and William Perrins in Broad Street, Worcester, and asked them to make up a batch of sauce from his recipe. This was done, but the resulting fiery mixture nearly blew the heads off Messrs Lea and Perrins, and a barrel they had made up for themselves was consigned to the cellars. Much later, in the midst of a spring clean, they came across the barrel and decided to taste it again before throwing it out. Wonder of wonders, the mixture had mellowed into a superlative sauce! The recipe was hastily bought from Lord Sandys and in 1838 Britain’s most famous commercial sauce was launched.

The Worcestershire sauce page on Wikipedia suggests that the above story was a ruse because “Lord” Sandys was in fact a lady, but it would breach decorum if a lady were to be associated with a commercially produced sauce. It’s a bit of a convoluted tale, but the page is worth a look for some of the other information it contains. Following a link from there, I found an excellent article on the subject by Greg Atkinson.

Although the recipe is still supposed to be a secret, it was reported in the British press a few months ago that the original had been found in a skip. The Telegraph has an interesting story about the secrecy surrounding the recipe.

The official site of Lea and Perrins is Splishme. It’s a really awful site with Flash everywhere and is practically unusable. However, if you have the patience to battle with the site, it does contain some interesting facts.

The Worcester City Museums website has an interesting page about sauces of the area, including Lea and Perrins Worcestershire sauce.

There’s also The Lea & Perrins Worcestershire Sauce Cookbook. I must confess I haven’t tried it yet but it’s had favourable reviews and the recipes sound yummy.

7 Responses to “The Story of Worcestershire Sauce”