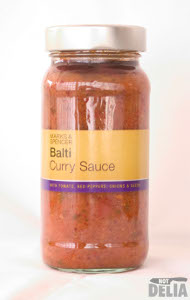 From time to time I see a jar or a packet of curry-style sauce which I think we might try for a change. They’re nearly always a disappointment, such as Willow Falls spicy Durban sauce, and Blue Elephant black pepper sauce. Occasionally, though, a good one will turn up (such as Brahim’s Rendang sauce – no review yet) and although I generally do like to make things from scratch, these jars can be a real time saver.

I made a real “how to cheat at cooking” meal of prawn curry. Delia Smith would have been proud of me! LOL! If you’re feeling exhausted after the festive season, you might be glad of a meal in minutes.

Method (from the label)

Stir fry the meat, fish, chicken or vegetables in a wok or saucepan. Pour over the sauce and simmer for 2 minutes until thoroughly cooked. Do not boil. Serve with either rice, popadums or naan bread.

Not Delia’s How to Cheat Method

The prawns were already cooked, so all I had to do was defrost them. I put the sauce (the whole jar of it) into a wok and heated it to simmering point. Next I added the cooked prawns and simmered until they were thoroughly hot. I garnished the curry with chopped, fresh coriander and served it with a shop-bought naan bread.

Here are the details of the Marks & Spencer balti curry sauce:

The front label describes it as “medium” and as being made with tomato, red peppers, onions and seeds. The back label, on the other hand, calls it a “spicy curry sauce with onions, tomatoes, red peppers, coriander and garlic”.

My first impressions were good. The sauce smelt fresh, tasty and appealing, so I tried a small spoonful of it cold, straight from the jar to give me an idea of what I was working with. Again, quite promising. On heating it, the sauce was fine, if a little bit too tomatoey. There was nothing wrong with it. However, there was nothing really right with it either. It lacked any complexity, spiciness and oomph. Mr ND said that it lacked a certain je ne sais quoi.

I would rate it 3/5. I wouldn’t mind eating it again but I wouldn’t go out of my way to do so, and most likely wouldn’t buy it again.