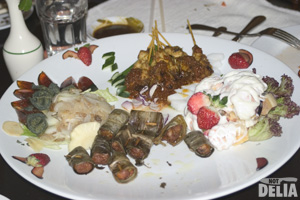 Regular Not Delia readers will know that I’m a big fan of buffets.  It’s a great opportunity to sample lots of different things without having to order a whole meal of something which might turn out not to be to your taste.  I usually just take one piece or a small spoonful to find out.

Similarly, I always take small portions on the basis that I can also go back for more if I want it.  Clearly not everyone thinks the same way.   As we were leaving a buffet in a top hotel recently, I was shocked to see the waste left on some of the tables.  The photo above shows not a feast for someone, but just their leftovers.  I thought it was so shameful, I took the photo just to show you.  And the staff member present said that wasn’t the worst by any means, but that these others had already been cleared away.

I was dumbfounded by this and asked, “Why do people take so much, only to leave it?”  Apparently it’s an attitude of “We’ve paid, so we can have what we want and who cares whether we waste it or not?”

Well, I care – on two counts.  One, it’s shameful to waste so much food.  And two, someone has to pay for it.  Wanton waste increases the hotelier’s or restaurateur’s costs. And who has to pay for it? The consumer.  Prices must go up to reflect the costs.

Some time ago Mr ND and I enjoyed a delicious buffet in Singapore. However, you had to beware of taking more than you could eat.  There were notices on prominent display, stating that all leftovers or waste would be charged at the rate of x per 100g.  Fair enough.  I’d like to see other hotels implement a similar policy.  Why not?  It reduces the waste, and ultimately reduces the cost to the more responsible consumer.

Another thing that annoys me about people’s bad behaviour at buffets is buffet theft –  but I’ll leave that for another day.