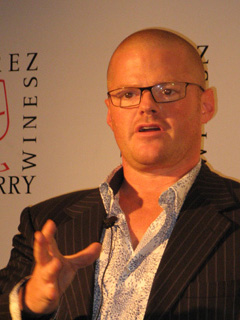 Heston Blumenthal is in the news again after temporarily closing The Fat Duck, his Michelin three-starred restaurant in Bray, Berkshire. The Fat Duck is rated as the second best restaurant in the world, beaten to first place only by El Bulli in Spain.

Blumenthal called in health inspectors after 30-40 people reported becoming ill, with sickness and diarrhoea, after dining at the Fat Duck. Despite extensive testing, no causes of food poisoning have been found and it’s thought that the illness may be due to norovirus, which is a common seasonal complaint also known as the winter vomiting bug.

Despite having to cancel several hundred bookings, resulting in a considerable loss of revenue, Blumenthal decided to temporarily close his restaurant while inspectors sought to find the cause of the outbreak of illness. He hopes to reopen on Wednesday.

“In each episode, Heston explores a period of extraordinary gastronomic innovation; recreating ‘lost’ recipes, discovering forgotten flavours and ingredients and travelling to remote areas to source unusual foods. His culinary quest takes him through Victorian Britain and Tudor England to the Medieval era and Ancient Rome.”

If you want to avoid food poisoning in your own kitchen, have a look at our section on food hygiene. It’s a series of articles broadly similar to the course offered by the Royal Society for the Promotion of Health for its Food Hygiene Certificate.

The Health Protection Agency published its report into the illness at The Fat Duck on 10 September 2009 – more details here.