We’ve been enjoying a few brunches at one of the local upmarket restaurants over the last few months, and one of our favourite features is the wine buffet – three whites, three reds, a fizz, and a rosé. On a couple of occasions we’ve tried a blind tasting of the reds or the whites to see if we can identify them, which is fun. 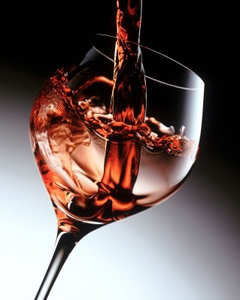 However, they’ve never had more than one rosé during all that time. So we thought we’d try our own rosé tasting with three 2007 bottles. (Not a blind tasting, obviously. We could have gone through some kind of elaborate rigmarole involving one of us covering up bottles and the other one pouring, but it seemed like a lot of hassle, and frankly we just wanted to get stuck in.)

The first rosé we tried was a big Aussie one by the name of Wildcard, from Peter Lehmann’s Cabernet Sauvignon vineyards in South Australia. It was much more in-your-face than any rosé either of us could recall drinking, almost like a red though not quite as heavy. The notes on the back describe it as a “vibrant, easy drinking style with a refreshingly dry, fruit driven finish”, which is fair enough.

The next was a Portuguese one with the rather corny name of Pink Elephant. (Beats Mateus, I suppose. And at least the bottle wasn’t the shape that launched a million cheap table-lamps.) It’s from the Estremadura region, and claims rather hyperbolically on the label to be “The ultimate Rosé wine from Portugal”. Apparently it was “created to be the definitive wine match for spicy food”. Hmm… we actually reckoned that the Wildcard was more likely to stand up to the assault of chillies and garlic. The Pink Elephant was lighter and a bit less fruity – and we hadn’t actually followed the instruction on the label to serve it colder than any other wine, which would have dampened down the taste still further. Oh well, it was a pleasant enough glug – and part of the profits go to helping endangered Asian elephants.

We ended up a couple of nights later (well, three bottles in one night might have been pushing it a bit, even for us) with the old classic: a Rosé d’Anjou. This was lighter than the other two, but smoother and subtler too, without however degenerating into the sickly syrupy styles common to some Californian “blush” wines.

Well, the French one was my favourite, with the Aussie edging it over the Portuguese. Not Delia basically agreed, although her view was that it was partly a matter of “horses for courses” – it depended on when, and what with. (This is why she’s running a food blog and I’m a minion.) But I’d be perfectly happy with any of them – especially at lunchtime or just by itself on a sunny afternoon out of doors.