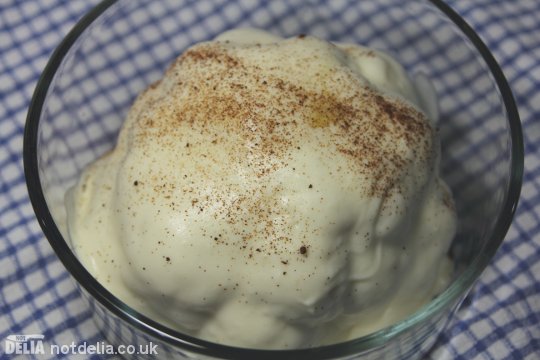 The Prawn Cocktail Years by Simon Hopkinson and Lindsey Bareham has two variations on this dish, which they describe as a soundly British nursery favourite. The first is an elegant “white-on-white” where the cauliflower is left whole. The second is the more familiar recipe where the florets are separated and the dish is served topped with crunchy breadcrumbs. I found that the elegant white-on-white looked a bit bland so I attempted to sprinkle some paprika on to garnish it, but my hand slipped. Hence the overdone paprika garnish in the photo above. It still tasted great, so no harm done.

They give ingredients and methods both for the sauce and for how to cook the cauliflower itself. Their cheese sauce is a béchamel sauce with grated Lancashire cheese and we’ve already covered cheese sauce on Not Delia, so for now we’ll just look at their slightly unusual way to cook a whole cauliflower. You can also make cheese sauce by adding grated cheese to a basic white sauce, but béchamel gives it a greater depth of flavour.

The trick is to boil the cauliflower enough to cook the stalks and leaves without making the florets mushy.

(…) fill a large saucepan that can hold the cauliflower snugly with 7.5 cm (3 inches) of water. Bring the water to the boil, add salt, and lower the trimmed cauliflower into the water. [I found it easier to do it the other way around, ie put the cauliflower into the pan and pour boiling water from the kettle around it.] Put on the lid and boil hard – the stalks and leaves will be in the water and the florets will steam – for about 20 minutes, check with a skewer after 15 minutes, until the cauliflower is tender. Remove it carefully to a colander and drain it very thoroughly.

To serve, place the cauliflower on a hot serving dish and pour over the hot cheese sauce.

This made a nice change from the usual way, I liked it and would do this again, but probably only if we had guests. The usual method of cutting off the florets is plenty tasty enough for an everyday supper.