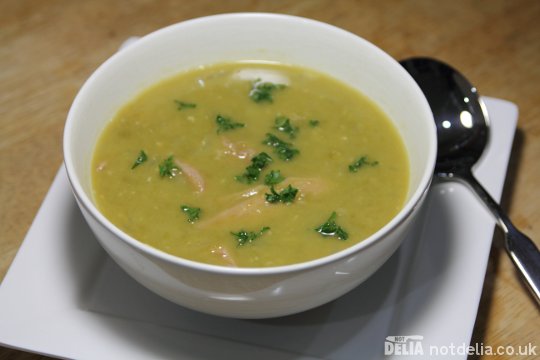 The Cook’s Encyclopedia of Soup has a recipe for split pea and ham soup. They recommend using a bacon hock, which is the “narrow piece of bone cut from a leg of ham”. I didn’t have a ham or bacon hock, but I did have a boneless bacon joint so I went ahead with my soup anyway. First, we can look at their recipe and then see what I managed to do with it.

1. Put the split peas into a bowl, cover with water and leave to soak overnight.

2. Cut the bacon into small pieces. In a large saucepan, dry fry the bacon for 4-5 minutes or until crisp.  Remove from the pan with a slotted spoon.

3. Add the chopped onion, carrot, and celery to the fat in the pan and cook for 3-4 minutes until the onion is softened but not brown. Return the bacon to the pan with the water.

4. Drain the split peas and add to the pot with the thyme, bay leaves, potato and bacon hock. Bring to the boil, reduce the heat, cover and cook gently for 1 hour.

5. Remove the thyme, bay leaves, and hock. Process the soup in a blender or food processor until smooth. Return to a clean pan. Cut the meat from the hock, add to the soup and heat gently. Season with plenty of freshly ground black pepper. Ladle into warm soup bowls and serve.

I don’t know about you, but that all sounds like a bit of a faff to me so here’s my simplified version.

Not Delia’s pea and ham soup

I didn’t find it necessary to soak the peas overnight. I just washed them until the water ran clear and then left them in a bowl of water while I got on with the rest of the prep.

First I sweated off a chopped onion in a little bit of butter. I also didn’t fancy faffing about with carrot and celery, or potato, in my pea and ham soup so I gave that a miss.

Once the onion had been sweated off, I added the washed split peas and plenty of cold water. Enough to cover the peas and more.  As the peas absorbed the water during the cooking process, I checked fairly regularly to make sure the soup didn’t boil dry and added more water as and when required. 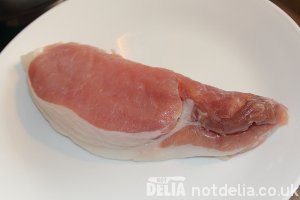 I didn’t have a bacon hock – only a joint of bacon, as you can see from my photo – so I put that into the pan along with the onion, peas and cold water. Why cold water? Because I wanted the flavour to come out of the meat to make the soup tastier. Unlike making a steak pie, or similar, you don’t want to seal the meat to keep all its juices in.

I added a couple of bay leaves. I love bay leaves – they can make a big difference to the flavour and it’s no bother at all just to bung one in.

Once the soup reached boiling point, I lowered the heat and left it to do its own thing for about an hour and a half, just checking occasionally to see if it needed more water. I didn’t add any stock at all as I wanted to see how the bacon joint would provide its own stock – and it did a good job on that. The soup was very tasty without any additional flavourings.

I didn’t bother blitzing it or processing it further. Hey! Pea and ham soup is peasant food, it’s not supposed to be made into a smooth purée. When it was all cooked, I removed the bacon joint and hacked it into chunks and returned it to the pot. Then I served it up with some freshly chopped parsley as a garnish.

It was rib-stickin’ stuff. Very tasty and warming – a complete meal in a bowl for very little effort.  Try it!