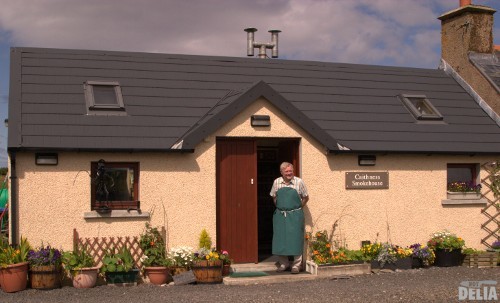 I recently had the pleasure of a visit to the Caithness Smokehouse.  This is the most northerly smokehouse on the British mainland and the only working smokehouse in Caithness.  John Inglis, the smoker, is always pleased to receive visitors and show them around and we received a warm welcome.  Unfortunately I’ve been a bit crippled since I had an accident so I had to talk to John from the confines of our car but Mr Not Delia stepped in to get the photos for me. 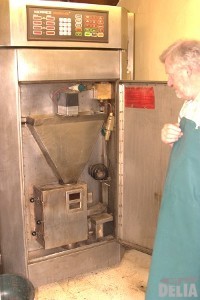 The Caithness Smokehouse only uses top quality local products, such as hand-dived Orkney scallops, fresh fish and seafood from the fishing port of Scrabster, mussels from the Dornoch Firth, locally produced meats including sausage, and free range eggs from a local farm.  John also told me that he’d found an old Meg Dods recipe for smoked goose, which was a local speciality in days gone by.  So, in typical John Inglis style, he is working on perfecting his own smoked goose in association with a local producer of geese who is reviving the ancient tradition of goose farming in Caithness.

As you would expect, John is very keen to promote local artisan products and is pleased to see the resurgence of interest in real food as opposed to fast food.  As he says:

John regularly attends local events such as Highland Games and plans to attend the Halkirk Games next week to show off his produce.  Despite being finalists in the Scotland Excellence Awards for food and drink for the last two years (the business is only a couple of years old so that’s pretty impressive!), John is still spreading the word about his smokehouse to raise public awareness.  He also invites school parties to visit the smokehouse and learn about the process.  He uses beech, oak, and chopped-up old whisky barrels to provide the unique smoky taste. 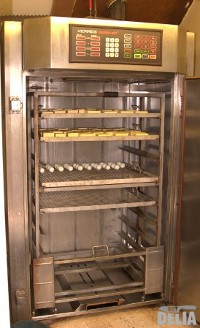 As well as supplying hotels, restaurants, retail outlets and visitors to the smokehouse, John also has a number of distinguished clients such as the Castle of Mey, which was the Queen Mother’s home in Caithness.

John also offers a smoking service for individuals and food producers.  “You supply it, we smoke it, you eat it.”  He’s willing to smoke pretty much any foodstuffs his customers care to bring him.  He was unfazed when one angler brought him a trout weighing 11lb 10 oz – the largest trout on record ever caught in Caithness. [I hope to include a photo of it here soon.]  His smoking service is very popular with anglers and he says it’s not all that uncommon for him to receive a 9lb trout for smoking.

Before we left, he gave us a sample of his smoked cheese – delicious! – but I’ll do a separate product review of that soon.  I’d better hurry, though before it all gets scoffed up. [Edit: you can read the review here.] I guess you’ll all be drooling now for some of these gourmet treats and probably thinking that Caithness is a wee bit far to go. Not to worry – once prepared and packed, all these products can be sent to any part of the country within 48 hours, so you don’t need to miss out.

John is also continually expanding his product range.  Visit the Caithness Smokehouse website for more details and to order online.

One Response to “Caithness Smokehouse”