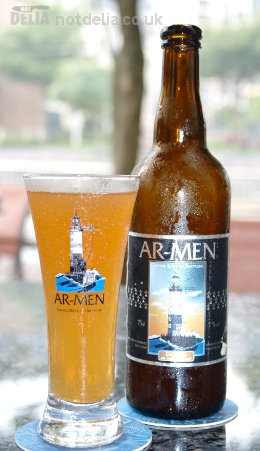 On our first visit to the Brasserie Wolf in Singapore we ordered a big 75 cl bottle of one of their special beers between us – Ar-Men Dorée, from Brasseries de Bretagne.

The first thing we noticed when we poured it out was that there was plenty of yeast in it. Not only that, but it never seemed to really settle – it just floated up and down and didn’t stop moving, because the little flakes of yeast were so small they just kept being buoyed up and down again and again. Nice when your beer also gives you something entertaining to watch.

As for the taste, it was like a very decent blond beer. (Brasseries de Bretagne themselves describe it as being in the style of the most renowned Belgian abbeys, which despite the hyperbole actually doesn’t seem like a terribly overblown description.)

Despite the strength (a healthy 7% ABV) it wasn’t hugely sweet, which was good. Rather, it was fruity without being reminiscent of any specific fruit – a sort of general fruity acidity. The aftertaste was a little honeyed without spoiling the overall impression of a nice refreshing beer. Perfect for a quayside café on a hot afternoon in Singapore, in fact.