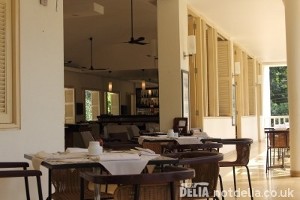 The last couple of times we’ve been to Siem Reap (February and June 2011) we’ve stayed at the FCC Angkor, which describes itself as a “boutique hotel” offering “refined luxury, casual elegance”. It’s really a pretty good place to stay – otherwise we wouldn’t have gone back a second time. You can read our review on our sister site British Expat. 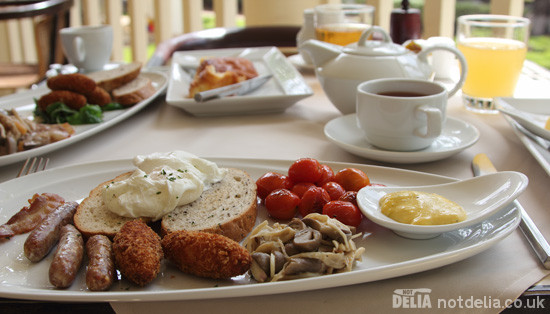 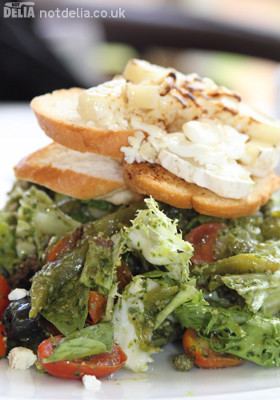 We’ve generally been impressed by the standard of the food, and happy enough to eat several meals there. Their breakfasts, included in the room price, are excellent and, as you can see, very generous – the portion sizes are large, and you get to choose one of each from their continental and their cooked breakfast menu every morning. And their various salads and other offerings have been very good in terms of quality and value for money – the Tuscan bread salad pictured on the right here was a delicious offering with roasted peppers, cherry tomatoes, capers, pesto dressing and grilled goat’s cheese.

But I guess everyone makes mistakes sometimes. We were very disappointed with their (raw) tuna and avocado salad. I guess you’re already thinking along the lines that raw fish can be a bit dodgy unless it’s been perfectly stored and prepared.  Actually, the raw tuna was really excellent. Unfortunately, the avocado was rotten. Yes, rotten. Not a little bit discoloured but totally black. Rotten. At first we thought the presentation was lovely and took photos of it. I suppose we thought the black bits were mushrooms or something, which admittedly did seem a little bit odd in a tuna and avocado salad, but what the heck. 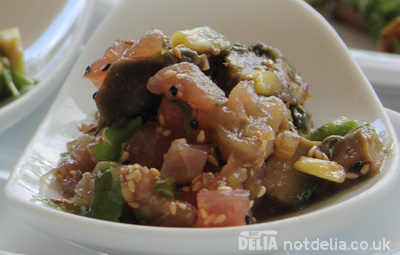 Having got the photos out of the way, we then were about to start eating. I had a closer look at the black things but couldn’t identify them. I called one of the waiting staff over and asked what the black things were. He explained to me as though I was a bit stupid that it was avocado. We had, after all, ordered the tuna and avocado salad. His tone suggested that I didn’t know what an avocado was. I said that an avocado is green – if it’s black, it’s rotten and not acceptable. He passed the buck to someone who could speak better English. I explained again that the avocado was rotten – it should be green, not black. Could she change it please? She did so without fuss and brought a replacement, which was perfectly acceptable, but ne’er once was there an apology or even a smile.

As I said, everyone makes mistakes sometimes. And, yes, I do complain politely if the food is not as it should be. In most circumstances, the situation is remedied quickly by a replacement being brought, and an apology and service with a smile is enough to make us happy campers again. But I really didn’t like their attitude. I also wondered about their standard of staff training. How many hands had this passed through before it reached us? It must have been newly assembled or the fish would have been past its best. So the chef had assembled it and the waiter had served it and neither of them had noticed that it was rotten. Maybe they thought that we wouldn’t notice it, or maybe they just didn’t think about it at all.

Well, that incident wouldn’t put me off staying, or even eating, at the FCC again. After all, it’s a great place to stay for many reasons. But, if we are to eat there again, I sure as heck will be careful to examine what’s on the plate.