a review by Mr Not Delia 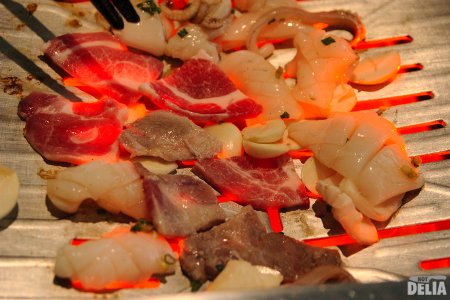 Not Delia and I had just arrived in Bangkok. It hadn’t been a good journey and both of us were tired, fed up, and hungry. And in spite of Bangkok being full of places to eat, we didn’t fancy any of our usual haunts. Not even the Hyatt’s excellent buffet, which we were far too late to do justice to anyway.

Then a rare moment of inspiration struck me. (ND will happily tell anyone who asks that I’ve got no imagination.) A few years ago while transiting Bangkok we’d grabbed a fairly last-resort lunch at a Korean barbecue in the Times Square shopping mall near Asok BTS/MRT station. I remembered that we’d enjoyed it.

“Do you fancy Korean?”

So off we trotted.

The Zok Chon Garden Korean Bar B.Q. is a smallish, low-key place on the corner of the third floor of Times Square. You certainly wouldn’t pick it out for either its branding or its decor; wood-effect Formica is the order of the day. But what it does do, and does excellently, is cheap Korean barbecue food with the traditional kimchi and namole accompaniments.

In fact, that can be a cause for confusion itself. The first Korean restaurants ND and I visited typically offered individual choices of kimchi and namole (small side dishes of vegetables – kimchi is spicy pickled vegetables, namole is blanched vegetables, often with sesame seeds) as separate menu items. But not all of them do that – it’s quite common for them to serve the side dishes as automatic accompaniments to the main dishes. There were none on offer on the menu here, but ND spotted that the steamed rice was followed by the words “(no side dishes)”. So we guessed that we’d be getting the stock supply.

We ordered two of our favourites – pork neck slices without sauce, and squid – and settled down to wait while the waitress turned on the heat for the barbecue. The barbecue was unlike any other we’ve used in a Korean restaurant – most of them have been gas-powered, but this one used infra-red light. Counter-intuitively, the edges seemed to be hotter than the centre. 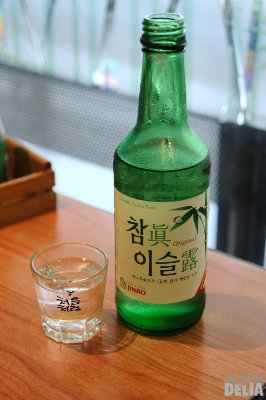 Meanwhile we’d already ordered our drinks. I was pleased to see that they had Hite lager (Korea’s biggest beer brand) on the menu, so we had a large bottle of that between us. It’s a very clean-tasting beer, certainly compared with other Asian lagers like Singha, Anchor or Tiger.

We also had a bottle of soju. Often mistakenly called “rice wine”, soju is actually a distilled drink not unlike vodka, only sweeter and (usually) less alcoholic. In this case, we were drinking Jinro’s Chamjin Isulro (Chamisul) – again, the top-selling brand in Korea.

It proved hugely difficult to take photos of the beer, though, because almost immediately after I’d lined up the bottle and glass, the kimchi and namole arrived – three of each, and each in its own individual little dish.

The kimchi were pretty much what we would have ordered anyway – radish (mooli or daikon), cabbage and some sort of shredded stalky thing. All of them were delicious.

The namole, likewise, included our all-time favourite – bean sprouts with sesame seeds – and a spinach sort of leaf which we were familiar with and enjoyed. The only odd one was a potatoey thing which included a single slice of red chilli and some strange white thing. Given that we’ve had snail offered as a namole in the past, I wouldn’t like to hazard a guess as to exactly what it was. It was edible, but not terribly nice compared to the others. But hey, you’ve got to try new things every now and again. Besides, if you’re so keen on one particular side dish that you scoff it all, they’ll happily give you a second helping of it. 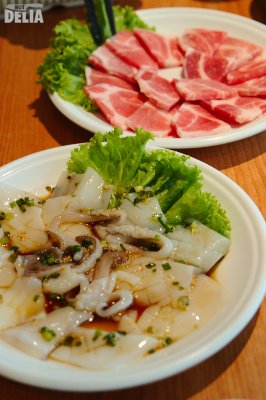 So once the namole and kimchi arrived, ND and I rearranged the table for a second attempt at getting the photo of the beer done – only to be interrupted by the arrival of the pork and the squid ready for cooking, together with a generous helping of lettuce leaves to wrap the cooked pork or squid in for eating. (This in addition to the bowl of vinegared lettuce we’d received when our plates arrived just after we sat down.)

Eventually everything was on the table and Not Delia was able to start cooking. This was a lot easier here than in other places we’ve been to, where the staff assume that you’re entirely helpless and that they have to do everything for you. Here, the staff let you get on with it if that’s what you want, but are very attentive and quick to help when it’s needed.

One small gripe was that the hotplate tended to stick. A little bit of oil or fat to rub over it before putting the meat on might have helped a bit. But it all worked out well enough in the end. Especially since it was a tasty, satisfying and cheap meal – the whole bill came to about £15 including drinks.

Overall rating: 4½ out of 5
We enjoyed our Korean barbecue meal very much indeed. So much so, in fact, that we went back there with a friend for dinner a couple of nights later, and then even went back yet again ourselves for lunch. Three visits in a six-day stay – that certainly says something about the place!