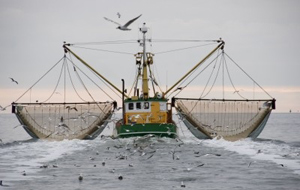 The scarcity of fish in the world’s oceans has been a recurring theme in the media for years. Some of you may remember the Cod Wars of the late 1950s (I don’t remember those!) and early/mid 1970s, when current affairs programmes were suggesting that we’d have to switch to alternatives to cod if the Icelanders wouldn’t allow us access to the fishing grounds off Iceland.

More recently, there have been widespread protests that the Common Fisheries Policy agreed at Brussels has been honoured by some EU member states’ fishing fleets more in the breach than in the observance, with complaints not just of overfishing but also of catches of immature fish. And we now seem to be reaching a point where there’s a real danger of a complete collapse in stocks of certain species of fish – the five most popular in Britain (cod, haddock, prawns, tuna, plaice, which account for 80% of seafood sold) being among those most under threat.

Scientists are pretty clear that there is a very real danger of this, and that it can only be averted by much tighter limits on fishing. In 2007, for example, they recommended to EU ministers that the EU fishing fleets shouldn’t catch more than about 15,000 tonnes of bluefin tuna a year, to allow the species to recover. (A limit of 10,000 tonnes would have been better still.)

However, EU ministers – mindful of the short-term effects on their fishing industries – set a limit of 29,000 tonnes, which itself would be enough to guarantee the collapse of the species. Illegal and unreported fishing meant that the actual amount landed was over 60,000 tonnes; more than four times the maximum recommended by the scientists, and more than six times the ideal amount!

And this isn’t unusual; the CFP quotas are routinely between a quarter and a third higher than the scientists’ recommended limits. To make matters even worse, fish caught over quota have to be dumped – even though they’re already dead – and sometimes even more are thrown over the side than are landed.

This is pretty dismal stuff. Yet it’s not entirely hopeless. The experiences of the Norwegian and US fishing fleets show that careful management of fishing, including the creation of  Marine Protected Areas (MPAs) where trawling is banned, can enable endangered fish species to recover very quickly – within a decade – albeit at the cost of cutting the fleets’ activities, which in turn can force many boats out of business. And co-operation between the Scottish, Dutch, Swedish and Danish herring fleets is helping ensure that herring doesn’t go the same way as the Big Five.

The British government is also taking action, with a commitment to create MPAs in UK waters by 2012 – a commitment shared by other EU member states in respect of their own waters. But fears are widespread that it may be too little, too late, unless the various fishing ministers can also rein in their countries’ fleets. So we may all have to get used to eating pollack, ling and flounder instead of cod, haddock and plaice…

2 Responses to “Water out of fish…”