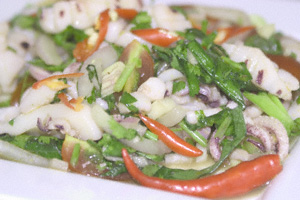 This is the sort of dish I can knock out without thinking about it, which I did. Then I dutifully photographed it. And then after the salad had been scoffed I realised that, as usual, I had just bunged everything in and hadn’t a clue about what quantities I’d used.

I scoured my cookbooks for a suitable recipe but didn’t find anything that particularly appealed. I did, however, find a pretty good video on You Tube – so why reinvent the wheel?

I followed a broadly similar method to the one shown in the video, with a few differences:

As with most Thai cooking, every cook has their own way of doing things. I learned my version from eating spicy squid salad in Thai restaurants in Thailand, so I think it’s fairly authentic.

Whichever version you choose, I hope it will be aroi (delicious)!