Smoky Jack, in the pedestrianised Upper Penang Street, is a pleasant place to sit outside and watch the world stroll by. The place inside is like going to another planet! They’ve got tables that are in a tunnel pod thing, all kind of weird stuff. Very strange! It’s fun, though.

They have quite an attractive menu so we decided to eat here.

We ordered shrimp cocktail, but one of my pet hates is getting shrimps, prawns, whatever you want to call them, that have not been cleaned properly. So I carefully explained to the waiter, who apparently relayed it to the chef, that we didn’t want the black bits. The waiter understood, “Oh, the black line down the middle.” Well, he appeared to understand.

I asked the waiter if he knew what “the black line” was. He didn’t, and he looked very shocked when I told him.

The dish itself was billed as a grilled shrimp cocktail, which we thought might be just a little different from what we normally expect from a prawn cocktail – basically the same sort of dish with a different twist on it. In fact, it’s a very different dish altogether, and emphatically not what you would get with a prawn cocktail from The Prawn Cocktail Years.

The salad accompanying the shrimp cocktail wasn’t too bad, and had a balsamic vinegar dressing. But apart from the fact that we had to send the dish back and get the shrimps cleaned, they came back overcooked. So the shrimp really weren’t very nice, and they tasted burnt – not just “blackened shrimp” tasting, actually burnt. All the heads had been cut off too. Fair enough, we don’t eat the heads anyway, but then we had to dig all the heads out of the bowl. The dish was at best mediocre, and I would give it 2 out of 5 at the very highest. 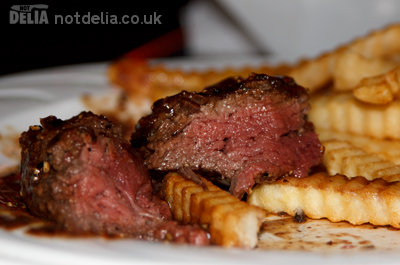 The steak in black pepper sauce arrived next. We’d been in two minds as to what to order – I like my steak medium rare, Mr ND likes his a bit bloodier – so we compromised and asked for a steak that was on the rare side of medium rare.

It appeared from the first few cuts that the meat was, basically, blue. However, on closer examination there was quite a lot of it that was actually medium rare, and a lot that was rare and possibly the blue side of rare. It was almost as if the chef had tried to cook the steak so that both of us would get what we wanted! It was a very nice piece of meat, very enjoyable.

On the other hand, the chips were mediocre – and there was no kind of side dish, we were offered the choice of vegetables or fries, so chips was all we had. The absence of any condiments was unusual; in so many places, as soon as you order a steak they plonk down half a dozen bottles of sauce beside you. The black pepper sauce itself tasted of black pepper, and there were certainly bits of black pepper in it – it wasn’t memorable, but it was OK.

Overall I rate this place 3 out of 5 – salvaged by the delicious steak. The prawn cocktail really wasn’t very nice at all. We might go back sometime for a steak and a couple of beers, but only if we happened to be in the area. I wouldn’t go out of my way for this one.

(This bar is not wheelchair accessible.  Please see our sister site CanDoCanGo for information about accessible travel.)