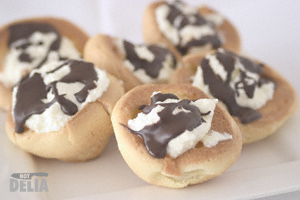 Having made up my choux paste the next step in the plan was to make chocolate eclairs, but it was one of these days when nothing went to plan. First of all I couldn’t find my piping bag, a rarely used piece of equipment in my kitchen – it’s probably still not been unpacked from the latest house move. (We’ve had about five house moves in the last five years. Boy, that can knock the stuffing out of you.)

OK, no piping bag, so what to do with the choux paste? Profiteroles! You don’t need a piping bag for them, only two spoons to make a nicely shaped dollop. (There’s no doubt a technical term for this but I’m sure you’ll get the idea.)

1. Place the choux paste in a piping bag with a 1cm plain tube.

2. Pipe into 3in (8 cm) lengths onto a lightly greased baking sheet.

5. Slit down one side with a sharp knife.

6. Fill with a sweetened vanilla-flavoured whipped cream, using a piping bag and a small tube.

7. Warm the fondant (qué?), add the finely chopped chocolate, allow to melt slowly, adjust the consistency with a little sugar and water syrup if necessary.

8. Glaze the eclairs by dipping them in the fondant.

Well, I certainly remembered that they tasted good. But that’s not really a Not Delia kind of thing for the home cook, so let’s have a look at my quick and easy recipe. As I said, not finding the piping bag led me to go down the profiteroles route. But even then things didn’t go to plan. I didn’t grease the baking tin enough and the bottoms of the profiteroles stuck.

All was not lost, though. I simply turned the bottomless pastries upsides down, spooned some whipped cream into them and topped with a drizzle of melted chocolate – see the photo above. A little bit unorthodox perhaps, but when I served them they disappeared in minutes. They tasted good, and that’s the main thing! 🙂 Mr Not Delia called them not-for-profit-eroles. Have a go at my quick and easy recipe!

1. Grease your baking tray properly to avoid the pastries sticking. Preheat the oven to 200-220°C.

3. Bake in the oven for about 30 minutes, until they’re nicely golden. Remove from the oven and allow to cool.

4. Meanwhile melt some chocolate in a double boiler or in a bowl set over a pan of boiling water. Also get your whipped cream ready. If you’re confused about cream there’s help here for you.

5. Assemble them. Stuff the pastries with cream and drizzle some melted chocolate over them.

Yeah, I know, not a very professional job but people were too busy scoffing them to be complaining about that. Despite the various setbacks en route, my not-for-profit-eroles were a big success.