Hmm. Unique? That’s a bold claim, I can almost hear you thinking. Let me explain.

This blog post was going to be all about how I made some really delicious mango chutney, complete with illustrations and even (whisper it!) a recipe.

Sadly, it’s been so long in the writing I can’t now remember what recipe I followed. Heck, I can barely remember stuff from two days ago, let alone what I threw together into a big saucepan nearly two years ago.

Yes, that’s when I made this chutney – back in October 2011. We were supposed to keep it for eight weeks to mature before even considering sampling it. What actually happened was that for the first week or so I kept badgering Mr Not Delia to drag it out of the fridge so that I could taste it, but he kept telling me to be patient. Humph. Then we both forgot about it entirely until about eight months later, dragged it out for a taste, pronounced it delicious, then promptly forgot about it again.

About another eight months after that, we discovered a really good Indian restaurant that does deliveries in our area. Although they supply most of the usual relishes with their meals, one thing they don’t provide is any mango chutney for the papadums. No problem! After carefully removing just a small amount of mould that was starting to form on the top of the chutney, and forcing Mr ND to carry out a taste test, I found that we were good to go with our own home-made mango chutney – still as delicious as ever, if not even more so with the extra maturing time.

So, what I can tell you is that home-made mango chutney keeps excellently if you put it into a properly sterilised and sealed jar and bung it into the fridge for the best part of two years. 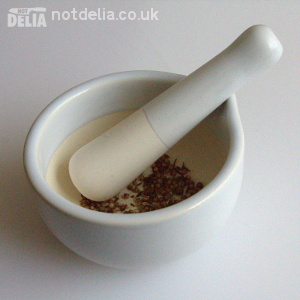 Oh yes, and you’ll need a pestle and mortar too. Fortunately IKEA had just opened a branch near us and I was able to pick up this one for a laughably low price. I am IKEA Woman!

Meanwhile, if you want to check out a recipe, I’m going to do something I rarely do and suggest you have a look at Delia’s, which actually looks not altogether unlike the one I used.

But it won’t be unique like mine. Because I’ll never have that recipe again. Oh no.