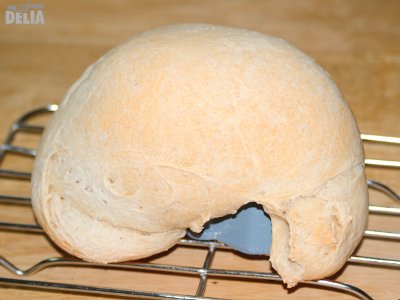 Is it a snail? Is it an armadillo? Is it a skull in profile?
No, it's Mr Not Delia's loaf of white bread

Not Delia bought a new bread machine recently. (At least this time round she didn’t buy it and tell me it was my Christmas present, which is what she did a couple of years ago when she bought a commercial salamander.) Anyway, I thought I’d have a go at making something in it.

The instruction booklet that came with the machine had several recipes, so I thought I’d start off small and simple with a 500g wheat bread loaf (the very first recipe in the book). Unfortunately, as I looked down the list of ingredients I realised that although they’d translated the recipes from German, they hadn’t bothered to do it properly – so I was struggling to work out exactly what “wheat flour type 1050” and “wheat flour type 405” were. In the end I improvised, used bread flour and plain flour respectively and hoped that would be near enough.

Having wrestled the baking tin with the ingredients back into the machine – no easy task – I pressed the appropriate buttons and was rewarded with the dough-hook springing into action. Only three hours and thirteen minutes before ND and I would be enjoying beautiful, freshly-baked bread…

In the end, it took rather longer than that.

When the programme’s finished, I had to figure out how to get the loaf out. It had to be sooner rather than later, both because the tin (being metal) was going to contract more quickly than the bread and grab it even more firmly in place, and also because leaving the bread in the tin was likely to end in its getting soggy as the steam condensed with nowhere to escape to.

But it wasn’t that easy. For starters, the whole thing was bloody hot (well, it had just come out of an oven, hadn’t it?). The loaf was pretty tightly wedged into place, and as the baking tin is non-stick knives were out of the question. In the end a wooden spatula came to my rescue.

However, long before taking the loaf out I’d already realised that 500g of dough was not really big enough for the tin, and that since it was a quite large rectangular tin, all the dough had ended up to one side, resulting in a rather strangely-shaped loaf (as you’ve already seen above).

Once I’d got the loaf out I realised that, predictably, the dough hook wasn’t in the baking tin any more, but was now embedded in the bottom of the loaf… 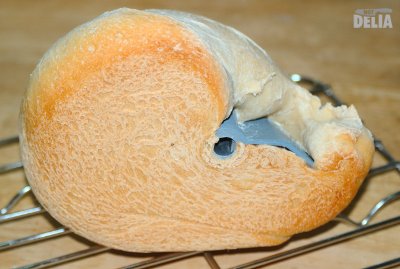 This one looks a bit like one of those Sellotape dispensers, doesn't it?

Since the dough hook is made of metal and is also non-stick coated, the same strictures against sharp implements applied and, of course, it was also pretty hot (though not quite so hot by now). A plastic Japanese-style (pointy) chopstick was my friend here.

As it happened, the bread itself was quite tasty, if a tad on the heavy side. It put me in mind of the loaves my mother made during the bread strikes in the mid-1970s. She improved as time went on, so maybe practice will make perfect. We’ll see.

9 Responses to “Mr Not Delia tries the new bread machine”