[apologies to Blur for nicking their title]

In the hectic lifestyle that so many of us live these days, shopping for food often seems to be done on auto-pilot, rather than with any kind of plan in mind.

But it’s worth pausing for a moment to consider how much food we buy that gets chucked out because it’s reached the end of its shelf life, because we’ve cooked too much of it, or because we simply don’t fancy it any more. 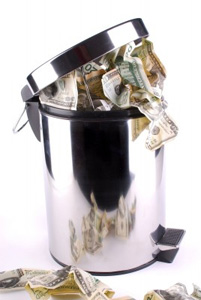 The shameful truth is that the vast majority of UK households throw away hundreds of pounds’ worth of food every year.

In May 2008 the British Government’s agency on waste reduction, the Waste & Resources Action Programme (snappily abbreviated to WRAP), published a report titled The Food We Waste. According to WRAP’s findings, the average family throws away roughly a third of all the food it buys.

The cost in money terms is pretty substantial, as you’d imagine. For the average household, it’s £420 a year. For families with children, it’s even higher: £610. (One more reason for me to be glad I don’t have any, then.)

But that doesn’t tell the whole story. There are hidden costs, too:

Of course, household food waste is only part of the story. Institutions with canteen facilities, such as schools and hospitals, throw away food as well. A BBC investigation on NHS hospitals in the East of England found that about £1m a year goes to waste – although that represents a far lower proportion (between 3.5% and 14.7%) of the food prepared. Still enough for an additional 50 nurses, though.

And of course restaurants, cafés and sandwich shops throw away a fair amount too. So much so, in fact, that a small but thriving number of “freegans” are able to live quite well off the discards.

But it’s householders that waste the most. So what can Joe Soap do about it?

One answer is simply to buy less food, and buy as and when you need it, which at least means that it’s not lying around in your house long enough for it to go rotten. The downside, of course, is that you spend a lot more time on shopping trips. And it’s not so easy to get a good variety of interesting stuff if you have only a limited range of shops locally.

Another is to keep a more careful eye on fresh food that’s approaching the end of its shelf life, and either eat it or freeze it – cooking it first if necessary and/or appropriate. Which is fine if you’ve got the refrigerated storage space. (Mr Not Delia and I bought a freezer specifically for home-made ready meals a while back, and we reckon it more than paid for itself within the first few months.) But that’s not really an option if you’re a singlie in a bedsit.

It’s a tough choice, especially if you love your food, rely heavily on fresh ingredients and want to be able to cook whatever takes your fancy on the spur of the moment.

I wouldn’t go as far as the cringe-makingly sanctimonous sentiment of Paul Gittings of Reading Borough Council that “there are plenty of places in the world where the food we are wasting would make all the difference”. True though it might be, it sounds too much like the “children starving in Africa” guilt trip laid on generations of British kids who won’t eat their greens.

But with oil prices skyrocketing, food prices following suit, and climate change promising unpredictable effects on food supplies, it looks as if we’re all going to have to watch what we buy – and throw away – a bit more closely in future.