The Hard Rock Hotel is one of Pattaya’s most upmarket hotels. Situated between Beach Road and Second Road, not far north of Pattaya Central Road, it’s convenient for all Pattaya’s nightlife and attractions.

The hotel’s foyer is worth a visit even if only to look at the displays there. They have a host of pop memorabilia, from Elton John’s platform-soled boots (funny how small his feet are) to Gerri Halliwell’s purple dress! 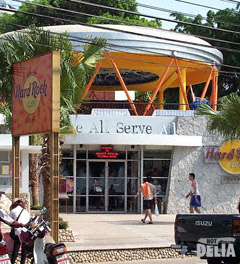 There are several restaurants and bars at the hotel, and of course a Hard Rock Café on Beach Road. Here’s our review of the Starz Diner Restaurant.

An advert in the local paper announced that Starz had started a nightly buffet and as an introductory offer (June 2006) you could go and eat all you like for THB 550. We thought we’d give it a go.

We chose to eat outside rather than inside the air-conditioned restaurant. We were given a table by the pool – the most beautiful swimming pool we’ve ever seen – and the ambience was lovely. It was comfortable, relaxing, and the service was friendly and efficient (but not over-attentive, which really irks us). Really, it was perfect and I couldn’t criticise anything.

The food was pretty good. All top notch stuff. To be fair, we’ve been to buffets here where there is a wider choice, but what was on offer was really very good – salads, soups, main courses, barbecue (including seafood), and desserts. Very nice indeed. We agreed that we’d definitely go back (depending on how much it costs after the introductory offer period).

A big bonus that we hadn’t expected was that after we’d ordered two glasses of wine (at THB 240 – ouch!), the waitress brought the bottle to our table and said, “I’ll give you the bottle.” Nice, we thought. We didn’t realise that she actually meant she would give us the whole bottle for free and we didn’t even have to pay for the two glasses we thought we’d bought!

Thus we had a lovely evening out with great food and a bottle of wine for less than £20. We were as happy as Larry (whoever he is).

This place gets a big thumbs up from us.

Rating 4 out of 5. (Nowhere is perfect – well, not yet, anyway). Oh yes, on that point, I did note that the ladies’ toilets were a bit below par although Mr ND says that the men’s were perfectly OK. So there you go; maybe I went in at a bad time or something.

We’ve been back a couple of times since, and it’s still consistently good; nice food, and excellent service. Admittedly the price has gone up; it’s now THB 874 (exchange rate as at 15 December 2008: £1 = THB 53.3) on all nights except Saturdays, when the price goes up to THB 1,000. On the other hand, they offer what they call free-flow service of beer, white wine and red wine (as much as you can drink, and they don’t stint in their service), so it’s still very good value for money.

By the way, we also decided to have a look at the rooms while we were there. They’re designed around a modern Zen style with oversized bed heads featuring famous rock-‘n’-roll personalities. In-room facilities include wall-mounted TV, mini CD player, mini bar, tea and coffee making facilities, feather duvets and pillows. Kings Club rooms have their own separate floors with private access, one-time laundry and pressing for eight items, breakfast and evening cocktails and high speed Internet access in the Club lounge.

The rooms are small, but so well appointed that you couldn’t fail to be comfortable here.

The hotel has many other facilities: gym and spa, climbing wall, kids’ club, general store, and of course that fabulous swimming pool…

If you would like to book your stay at the Hard Rock Hotel, their rack rates start from US $125 plus 10% service charge and 7% VAT.