One of the most interesting discussions we’ve had elsewhere recently has been about food additives. 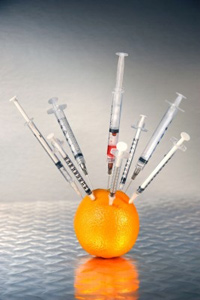 Do we really have to put up with all the additives that get bunged into processed foods by the manufacturer? (I’m not talking about things like bunging brick dust into spices to bulk them out, which was one of the favourite tricks of some of the more unscrupulous market stall holders in Bangladesh. Obviously no-one needs to eat brick dust, unless it’s a particularly bizarre pregnant woman’s craving.) Many of these are added for cosmetic or flavour-enhancing purposes – but those aren’t always their only effects.

There’s a much-hyped book available called You Are What You Eat by nutritionist Gillian McKeith. I must admit I haven’t read the book and have no intention of doing so. I can’t stand people preaching to me about how I should live my life and this woman seems as though she would be one of those odious types. Sorry if I’ve misjudged her, but she seems like yet another good reason to flee the UK.

Despite wanting to run a couple of thousand miles from this particular woman, I must admit she does have a point. There definitely appears to be some connection between food and behaviour. Additives, in particular, are notorious for causing behavioural changes. I’m sure a lot of you – especially parents – will be familiar with some of the more notorious additives, like tartrazine (also known as E102) or Sunset Yellow (E110), which are not recommended for use in foods for children because they cause hyperactivity, rashes and other undesirable reactions. There are all sorts of “new” syndromes for all these various hyperactive behaviour, but as yet no one has officially labelled them “too much intake of bad additives syndrome”.

Now, I am not a fan of the nanny state, and I do believe that we should be able to make up our own minds about things. To do that we need information. Proper information, that is. Not a load of misleading gumf. Mind you, some people don’t seem to question what they’re told anyway. If some processed rubbish has the word “healthy” on it, they believe it must be healthy. “Reduced sugar” must be good, regardless of how much sugar still remains in the product. And “low fat” must be good for you even though it still has 20% fat. (Is anyone really taken in by packaging labelled “80% fat free”?)

Processed food has more additives, and often much of the content that’s good for you is removed or neutralised. We don’t generally eat that rubbish (although Mr ND’s known to have the occasional sausage sandwich) – not because we’re health freaks but simply because we don’t like the taste of it. It’s not difficult to prepare your own fresh food. But gee, I’m starting to sound like that woman I wanted to avoid.
What gets bunged into the food where you are? Do you have anything to say about this topic? Why not leave a comment?

2 Responses to “You Are What You Eat”