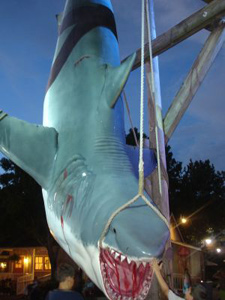 Think about sharks, and most of us tend to think about them as very much the eater rather than the eaten. I certainly do, anyway.

But that’s not always so. Ask for fish and chips in the State of Victoria in south-eastern Australia, and you’re more likely to get a fillet of shark than any other type of fish – although it’s generally called ‘flake’ rather than shark. There are several species of shark that go by that name, but the most commonly used is the gummy shark.

Iceland is probably more well-known for whaling than for shark fishing. But apparently a famous Icelandic national dish is fermented Greenland shark – kæstur hákarl – which smells strongly of ammonia and has a powerful fishy taste. Many Icelanders never eat it, and it’s associated with hardiness and strength – it’s usually accompanied by the local spirit, brennivin. (I wonder if those who do eat it, eat it for a dare?)

Finally, of course, there’s shark-fin soup. It’s renowned in some Asian cultures as a healthy food and has even been claimed as an effective preventative against cancer (on the basis that sharks never contract cancer). Plus, of course, it’s very expensive, so it’s a status symbol too – eating it in a restaurant is conspicuous consumption in a very literal sense.

But there’s absolutely no scientific basis for the cancer claims. The idea that sharks don’t get cancer is a myth; it’s been established that they do. And at least one study’s shown that shark cartilage has no therapeutic effect in treating cancer.

The means used to harvest the shark fin is pretty horrific, too. Fishermen use a hot metal blade to cut the fin off the live shark, then throw the now immobile shark back into the water, where it either suffocates or is eaten by predators.

Despite the widespread outcry against finning, it continues in waters worldwide, including Britain’s. According to the Shark Trust, 27% of fins traded on the Hong Kong market (by far the biggest worldwide market for shark fins) are supplied from EU waters, and 80 tonnes a year of shark fins are landed at UK ports under an exception to the EU ban.

Shark fishery more generally is also a problem. Little is known about the numbers of sharks in the world’s seas and oceans – which is a worry, because as apex predators, several shark species are long-lived and breed in small numbers. Partly because of this, overfishing is a real danger.

And it’s not just the large sharks like the Great White shark, the tiger shark and the hammerhead shark that are affected by overfishing, either. The spiny dogfish, more commonly known in Britain’s fish ‘n’ chip shops as rock salmon, is in real trouble – it’s vulnerable worldwide, and critically endangered in the north-east Atlantic where much of the UK’s consumption is fished.

So before you ask for that rock and chips, think whether you might not prefer a more sustainable option instead…

One Response to “The great shark feeding frenzy”