It’s early August again, so time for the wildfowl on the British moorlands to take cover as the hunters head for the hills. 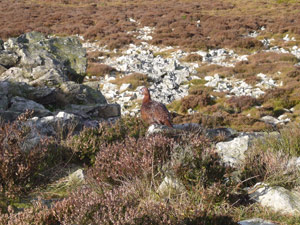 The grouse-shooting season in the UK starts on 12 August, as it has done every year since the 1831 Game Act was passed. Red grouse are the first birds to come under fire, though. Black grouse have eight days’ grace, until 20 August; partridges are legitimate targets from 1 September; and it’s open season on pheasants from 1 October (unless you’re driving a car, in which case it’s whenever one happens to run under your wheels).

The red grouse and black grouse aren’t the only species of grouse in the UK, but they’re the two that qualify as game birds. The red grouse (the Famous one off the whisky bottle) is more closely related to the ptarmigan than to the black grouse, which is a relative of the capercaillie. But they’re all broadly part of the pheasant family. They live in moorlands and forests and on mountainsides, and usually don’t migrate.

The red grouse is found only in the British Isles. Sadly, its numbers are decreasing. This isn’t a reflection of overhunting, though; the real cause is thought to be disease and the loss of heather moorland. (Young heather is a major part of the red grouse’s diet; they eat up to about 50g/2 oz a day.)

But the decline isn’t uniform. The Daily Telegraph reports that some of the English moorlands in the North Pennines are expecting one of the best grouse shooting seasons for years, whereas many Scottish estates have cancelled bookings. According to the British Association for Shooting and Conservation, “Grouse densities of more than 60 birds per square kilometre at 12th August are necessary if moorland is to be economically viable for driven shooting.” With 15,000 square kilometres given over to 459 grouse moors, that sounds like a lot of birds – but the current estimated population in the UK is something like 250,000 pairs rather than the 450,000 needed to make the moorland economically viable.

With the relative scarcity of the birds, obviously careful management is needed if the population is to thrive again. Rules – London’s oldest restaurant and, uniquely, with a grouse moor of its own – reckons that it costs about £23,000 a year to employ a full-time gamekeeper, including running costs of a Landrover and other equipment and accommodation. Add to that the cost on a shoot day – about £600 for beaters at £25 each, plus loaders and pickers-up for about £40 a day each – and you start to see why shooting’s such an expensive business. It can cost £10,000 to book an estate for a day’s shooting, so in theory that could be a gross return of roughly £1.2 million for the grouse season. But if the breeding season’s been poor then the estate owner may be forced to cut down on the number of days available for hire.

Of course, commercial shooting isn’t the only way to ensure the grouse population’s conserved. A few grouse moors have been bought by conservationists, including Geltsdale in northern Cumbria, which the Royal Society for the Protection of Birds started managing full-time in 2001. The RSPB‘s approach hasn’t necessarily endeared it to the hunters; the Countryside Alliance made much of a study by Natural England which showed lower numbers per square kilometre of various bird species on Geltsdale compared to shooting moors. But the RSPB replies that its aim is to encourage species diversity rather than simply allow the numbers of particular species to be ramped up artificially.

All the same, much of the UK’s grouse population each year does indeed find its way to dinner tables. It’ll come as no surprise to find that the redoubtable Clarissa Dickson Wright has come up with a recipe for grouse carpaccio which is included in the book she’s co-authored with Johnny Scott, The Game Cookbook. Meanwhile, the BBC website carries a recipe from Nick Nairn with a very Scottish flavour: pan-fried grouse with skirlie and glazed beetroot. And in The Times you can find Gordon Ramsay’s honey-roast grouse with apples, cinnamon and cider.

So what’s the fuss about?

The good news is that, for once, comparisons with other meats generally don’t include chicken. It’s usually classed as a red meat, which means it needs a certain amount of hanging and is usually served rare. However, this can be taken to extremes; some insist on fierce roasting so that the outside is scorched but the interior of the meat is still bloody, and some hang the meat so long that it’s green and “moving”. You’re not likely to find either in restaurants these days, though – grouse is generally refrigerated while it’s maturing.

It’s rather odd that such a gourmet delicacy should be the subject of a self-defeating “race to the table”. Traditionally, game is hung to allow the flavour to develop and to get rid of any toughness in the freshly-killed meat. Yet restaurants all over the world – and particularly in New York – vie with each other to be the first to serve fresh grouse. It’s a bit like the races to serve Beaujolais nouveau (also known as Beaujolaisprimeur) on the third Thursday of November; here, too, the wine benefits from a short maturation period before being drunk (it’s more suited to drinking the following Spring).

Perhaps the haste is because of the short window of opportunity. If you want to enjoy grouse, you’ve only got a limited amount of time – the season finishes on 10 December. Dunno about turkeys voting for Christmas, but I bet the grouse can’t wait…