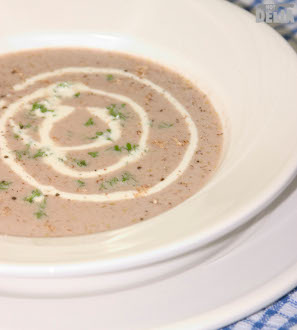 Before you proceed any further, I’ll tell you that this was more faff than it was worth. You’d be much better off making my leek and potato soup. I’m just documenting it here because I went to the bother (and “bother” is the appropriate word) of making it and taking photos.

Let’s start at the very beginning (as Julie Andrews once sang). Neither Mr ND nor I are much good at housework, but for some reason he decided to tackle a pile of jumble which had lain for weeks in front of the living-area bookcase. Among other goodies – it was kinda like Christmas – he unearthed a cookbook. “Did you forget you’d bought this?” he asked.

I had indeed forgotten. As well as having a full bookcase dedicated to cookbooks in the kitchen, I have them lying all over the house and find it hard to keep track of them all. (By the way, don’t worry about the housework side of things. The Not Delia kitchen is perfectly clean, and we have someone come in a few times a week to help us with the other stuff so we’re not doing too badly.)

The book in question is the American Food & Wine magazine’s 2009 edition of its annual cookbook, which contains an entire year of recipes. It contains “over 700 amazing recipes”, some terrific ideas, and some really good photos. Wow! How could I have forgotten I’d bought such an exciting book?

Hesitation kills. I decided to make something straight away. One of the first things to catch my eye, for which I had the ingredients readily available, was silky leek and red wine soup (page 58). It seemed like a bit of a palaver but I decided to have a go anyway. 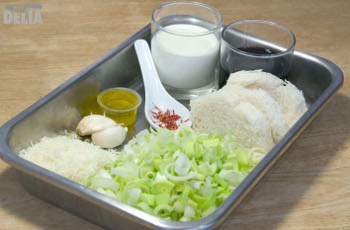 I really can’t be bothered with all the typing to give you a list of ingredients from the book, especially since you’re probably not going to make the soup anyway. Here’s a photo of them instead. Why there’s saffron in there beats me. Pretentious nonsense. Interestingly, they include bread, presumably as a thickener. I’d not come across that idea before but it may well be something I’ll try again in the future. There’s also stock in it, which isn’t included in the photo, but you’d already figured out for yourself that we’re not making a dry soup, no? (The recipe says chicken stock, I used vegetable.)

The method was a bit of a pain too, and the instructions weren’t always clear or easy to follow, but I persevered. The result, quite frankly, was mediocre. I tried to jazz it up with a garnish of swirled cream, chopped fresh parsley, and a few grindings of nutmeg, but nothing was really going to save this dismal dish. Mr ND commented that I make much better soups without recipes or any of the faff. I guess we won’t be having this one again. Pity, but it looks as though there’s lots more things to try out in the book so let’s see what happens next…