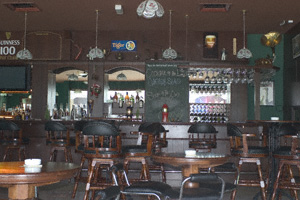 We heard there was a new Irish pub in Penang, so this was a must-visit for us. Mr ND was craving an Irish breakfast and Shenanigans sounded like just the place to get one.

It’s situated at Jalan Tanjung Tokong about 200m north of the junction with Jalan Fettes, with plenty of parking space, if you’re driving there, or easy taxi drop-off. It’s a big place and looked very promising.

Unfortunately the reality didn’t live up to the promise. We found it spacious, clean and new, with a very flexible space which would be good for meetings, parties and events. But it was somewhat impersonal, empty and not Irish at all. Perhaps it’s the wrong theme for the space.

The owner (or manager?), who didn’t appear to be Irish (maybe Australian?), didn’t even say “hello” or attempt any of the other pleasantries that are usual in an Irish pub. You’d think that having such a new pub he might have tried to engage in some conversation, even if only to elicit feedback.

I wouldn’t go as far as to say we felt unwelcome – but we didn’t really feel welcome either. Shenanigans lacks the warm hospitality one usually gets in an Irish pub.

The menu was rather uninspiring too. And they didn’t even do breakfasts! Mr ND couldn’t believe we’d come to what’s probably the only Irish pub in the world which doesn’t do breakfasts.

The music wasn’t any better, with a somewhat tedious cacophony of Shitney, Whitney etc.

Time to leave, we thought, but we had a quick check of the facilities before we left.

Gents: Mr ND reported that the throne room wasn’t clean and smelt of piss, with unsavoury splashes on the seat. A separate room behind a closed door had two (mismatching, possibly second-hand?) urinals which smelt every bit as bad as the throne room – they clearly hadn’t been flushed recently. But at least the handwash area was clean and stocked with soap.

Ladies: there were two cubicles, both dirty. OK, so presumably customers made it so but the place obviously isn’t checked for cleanliness by staff. I declined to use it. I suppose if one was desperate you could “go” in there, but you’d have to clean it first. Yuk!

We visited at about 2pm on a Sunday. You’d think that an Irish bar would be throbbing with people at that sort of time, but there were only about eight customers in total in this huge, empty barn of a place.

We left immediately after finishing our pints of Guinness (the Guinness was fine, at least) totally confused as to why anyone had thought to call the place an Irish pub – or indeed why the owners had chosen an Irish theme for a building that really didn’t lend itself to an Irish theme at all.

Having read about Shenanigans on various other blogs, I also discovered that they’d served only Malaysian food at their opening party. It seemed like a lost opportunity to show what was on offer. But perhaps not, since there’s very little Irish about the place anyway other than its name and a couple of retro Guinness posters. Hmm, that’s not enough to make a good Irish pub.

Our rating: The Guinness was OK, and apart from the grotty toilets there was nothing wrong with it. But there wasn’t much right either and we wouldn’t go back. I suppose we could stretch to 2 out of 5.