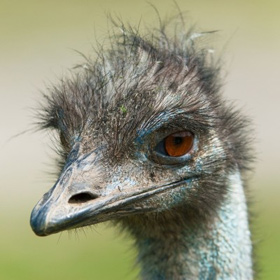 Remember the BSE scare of the 1990s? And the alleged links between traditional red meats and nasties such as heart disease and cancers of the digestive tract?

Small wonder, then, that there was so much interest in ostrich meat in Britain in the early 1990s. With no risk of vCJD and a good deal less cholesterol, it was perceived as a healthy alternative to beef. So it had plenty going for it.

Actually, it still has. It even tastes very similar to beef, and has a similar texture; if anything, it’s better than bog-standard beef because there are fewer stringy or boingy bits. We’ve had ostrich steak sandwiches at home on several occasions and thoroughly enjoyed them.

It’s been very successful commercially in Australia and South Africa too, for several years. So why haven’t we seen more of this wonder meat in supermarket chiller cabinets in Britain?

Sadly, it all boils down to money.

It was such a hot investment prospect in the early ’90s that several companies decided to get a piece of the action. One of them, Evans’ Ostrich Centre set up by husband-and-wife team Esther and Martin Evans near Swansea, attracted investments totalling £875,000 on the promise of annual profits of a remarkable 70 per cent. How about that for a cash cow?

A rival business, the Nottinghamshire-based Ostrich Farming Corporation, was set up in 1995 with a big publicity splash involving adverts in the national newspapers and with videos featuring TV personalities. Offering the chance to invest in breeding birds at up to £14,000, and boasting state-of-the-art facilities in Belgium, the OFC managed to attract several investments of up to £60,000, to a total value of a staggering £21 million. Small wonder – the prospective return was billed at an unbelievable 270 per cent!

As you may have guessed, the key word in that last sentence is “unbelievable”. Both the OFC and Evans’ Ostrich Centre were frauds. Martin Evans came up with his idea while serving 15 months for obtaining property by deception; more than a third of the money invested in the scheme disappeared into offshore accounts by the time the Centre’s holding company was declared insolvent in mid-1996.

As for the OFC, it initially dealt direct with the Belgian farm – which it never actually owned; it simply bought birds from there – but soon afterwards set up an offshore company called Wallstreet Corporation. (Hmm… maybe the clue was in the name.) Wallstreet simply paid much of the invested money into bank accounts in the Isle of Man and the Cayman Islands, enabling two of the OFC’s directors, Brian Ketchell and Allan Walker, to make millions of pounds. What’s more, the OFC simply didn’t own many of the birds it claimed to – for at least 925 of the ostriches, only the identifying microchips ever existed, and 420 of the supposedly mature breeding birds were only chicks. The Department of Trade and Industry wound up the company in early 1996, and a Serious Fraud Office investigation resulted in Ketchell and Walker being convicted of conspiracy to defraud in June 2000; but few of the nearly 3,000 investors were reckoned likely to see any of their money ever again.

It never ceases to amaze me how some people’s gullibility seems to increase in proportion with their greed. A DTI investigator into the OFC in April 1995 quipped at the time that he hoped members of its “Ostrich Owners’ Club” weren’t burying their heads in the sand over the likely returns they might earn. Clearly, they were…

If you’re looking for ostrich recipes, try my ostrich with black pepper sauce. Alternatively there’s a wide variety of ostrich recipes at the website of the Pathfinder Ostrich Farm. (At least this one exists…)