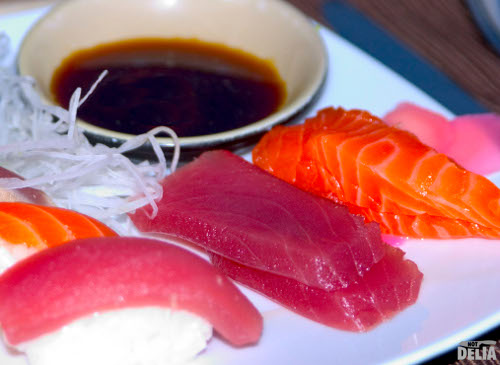 Whilst reading one of the supplements in the Bangkok Post, I spotted a promotion saying that Kyushu food was on the menu at the Hotel Centara Grand at CentralWorld. I wondered what Kyushu was, and a quick Internet search revealed that it’s the third largest Japanese island, to the south-west of the main island Honshu. This sounded really interesting so the following evening we trotted off to the Ginger restaurant up on the 24th floor, eagerly looking forward to trying something new.

We hadn’t booked ahead but had gone early on the basis it would give us a chance to look around and also to come up with a Plan B if we didn’t fancy what was on offer at Ginger. It all looked pretty good so we decided to book for 7pm. (It was just after six by this time, so we went window shopping in the mall meanwhile to pass the time.) The receptionist taking our booking was very friendly, and suggested we could have a table by the window to see the sunset. We readily agreed.

Unfortunately by the time 7pm came around, Bangkok’s smog had obliterated any view of the sun. Ah well, it’s the thought that counts. Even so, the view was pretty good from up there – if you like city scenes, which I do.

As one would expect in a Japanese restaurant, they had a sushi bar. Their sushi and sashimi was very good quality, although the range of it was rather limited. Next I tried their tom yam (Thai spicy soup) which was also very good. (You can see my tom yam recipe on FoodForFriends,Yeah!) But we still weren’t seeing anything that appeared to be particularly Kyushu food.

The duck breast teppanyaki, which Mr ND subsequently ordered was similarly dry, and apparently tasted like lamb’s liver – I didn’t try it. Amazing that you can get duck to be dry, but they managed it.

Perhaps predictably, they seemed to prepare the teppanyaki dishes in a “by rote” way with each dish coming with its own pre-defined set of accompanying garnishes, sauce and seasoning. It may well be that you could have asked them for something tailored to your own individual preferences, but you weren’t encouraged to.

Meanwhile our server had informed us that Ginger and their sister restaurant, The World, a 24-hour international restaurant across the lobby, were running a special promotion in which if you’d signed up for the Japanese buffet, you could also partake of the Italian buffet. It seemed like too good an offer to refuse, so off we went to see what was on offer in the Italian buffet. It seemed a bit odd to be traipsing between two restaurants across a lobby, but what the heck?

I tried the Caesar salad first. I love Caesar salad! But only I know just how I like it, and sure enough, the required ingredients were there, along with a large mixing bowl so you could DIY according to your own taste. Great, I thought as I happily starting making my salad. Then one of the staff had to come and spoil things by being over-attentive. I know she was only trying to be helpful but I was managing fine on my own and was making myself a portion that was very small, which is what I wanted, and she kept trying to put extra in. Grrrr! Go away! (Only thought, not said, I assure you.) When I finally got it into her head that I was happy doing it myself, she did move away. But only by six inches. It felt like she was sitting on my shoulder and I had to ask her repeatedly to move away a bit more, which she eventually did. I really dislike it when people unnecessarily invade my personal space like that.

Next, I went to the bread station, which had a range of truly delicious breads. There was tapenade, two types made from black and green olives; both were excellent. They also had a tomato-based salsa, which was bland and watery. Oh well, you can’t win ’em all. There were some nice cheeses on offer too.

I was starting to wish we’d gone Italian rather than Japanese by this stage. Not least because I was starting to defrost in the somewhat warmer Italian restaurant, having been sitting in the icy, over-air-conditioned Japanese one.

Mr ND had meanwhile got himself a striploin steak, which he later said was boingy and hard to cut. We did wonder whether it was the knife, as had been the case at the otherwise excellent Grand Hyatt Erawan – but this knife seemed to cut other food perfectly adequately.

So, after a successful foraging expedition into the Italian buffet, we headed back across the lobby with our plunder to sit in the fridge. Honestly, it was so COLD!!!!! I asked about it and was told that the setting was set centrally by the hotel maintenance staff and couldn’t be changed. I think it would probably be fine if the place was busy, but apart from a private party in a curtained-off side room, there were very few people in there. I usually carry a pashmina in my day-pack for such (not uncommon) eventualities, and the pashmina was out pronto, but it kinda spoils the ambience of a meal when you’re shivering inside a blanket. Our server tried to be helpful and offered hot tea or soup, but all that was really required was for them to turn down the fierce air conditioning a little. But no joy there. 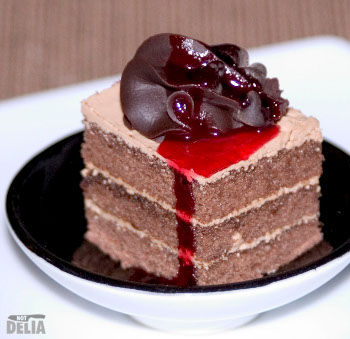 There were some very attractive looking desserts. I chose one which looked beautiful (you can see it in the photo here), but the sponge was dried out and tasted stale. Mr ND said it tasted a bit like Jacob’s Mallows, whatever they are.

Included in the price of the buffet was free-flow Asahi Super Dry beer. It soon became evident that free meant free as in “no additional money”, not free as in “open-handed”. The flow was an intermittent trickle rather than a flood. We’re not really sure why the staff were so slow in coming forward with the beer, because the place wasn’t terribly busy. We had to keep asking for it.

All in all we were expecting to try something unusual – Kyushu food – and didn’t really get it. Being invited to enjoy the Italian buffet as well was a terrific bonus. We had a pleasant evening out, apart from the cold. But I doubt if we’d go back when Bangkok has so many truly wonderful places to eat.