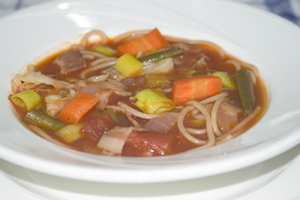 This isn’t a recipe for an authentic minestrone soup. I don’t know what an authentic one is but every cookbook I looked at seemed to make it in a completely different way.

My version was to look at some pictures and have a “use it or lose it” day with the contents of the vegetable drawer in the fridge. Most recipes recommended using a ham hock, which I didn’t have, to provide the stock so I improvised by using some smoked streaky bacon rashers as well as a home-made vegetable stock which I’d made and frozen on my previous “use it or lose it” day.

First sweat off the onion and garlic in a little oil in a suitable pan. Peel and chop the carrot and add that to the pan.

Meanwhile wash and chop the other vegetables. Start with those which will take longest to cook, so if you’re using potatoes start with them.

When the onion is soft and translucent, add the contents of the tin of tomatoes and the stock. Bring the soup to the boil and then simmer. Add the snipped bacon.

As it’s simmering, add the other vegetables – adding those that take longest to cook first and ending with the quickest.

You’ll need to use your own judgement about when in the process to add the pasta, depending on how long it’s likely to take to cook it. I added mine after the slower cooking vegetables and before the faster ones.

Simmer gently until everything is cooked to the desired doneness (about 20 minutes).

Serve. It doesn’t need anything else. It’s a meal in a bowl.

Omit the bacon and add a veggie stock cube for extra flavour.

Use rice instead of pasta? I don’t know – I’m a cook, not a nutritionist.

Use small shapes of pasta or break up the spaghetti into shorter pieces. For extra calories add some grated Parmesan cheese. Put in a thermos flask, if required, and serve in a mug.