This is delicious and can be used as part of a salad (it’s nice with avocado), served along with sushi and sashimi, used instead of smoked salmon as a starter, or just enjoyed on its own as a snack. It’s very easy to do, but it’s not quick because you have to wait for certain things which take time to do. But you don’t need to be slaving in the kitchen for hours while the food is sitting in the fridge doing its own thing and going through its salting and marinating processes. You can go from start to plate in about two hours, but it’s usually better just to get the salmon into the marinade ready for eating the following day.

I did have a recipe for this many years ago, but that is long lost now. Let me show you instead how to do it.

You’ll need a nice fresh piece of salmon fillet – as fresh as you can get. Ideally it should be sashimi quality. If it doesn’t smell fishy, then that’s what you want. You also need an orange, some soy sauce and some runny honey. And of course table salt to dry out the salmon before you start to marinate it.

To prepare the salmon before marinating

First remove the skin if it hasn’t already been removed. (You don’t have to throw it away – crispy salmon skin can be a nice snack in the right setting, but that’s perhaps a recipe for another day.) Once you’ve got your skinless fillet, then check for pin bones and remove them. If you’re not sure about how to do this, please see my earlier posts for how to remove the skin from a fillet of salmon and how to pin bone a fillet of salmon. 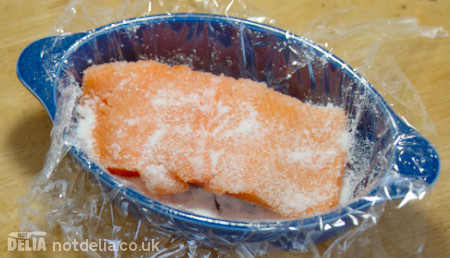 Now you have your skinless and boneless salmon fillet, you need to salt it. With a whole heap of salt. Yes, really a heap of it – much more than you might sprinkle on your dinner. (I used about four tablespoons.) Don’t worry, you’re going to wash the salt off later. Its purpose is to draw the juices out of the salmon. So, put a bit of Klingon onto a plate, place the salmon on top of it and bung some salt onto it, turn the fish fillet over and do the same to the other side. Rub the salt in a bit if you like too. Now wrap this up (in the Klingon) and put it in a suitable dish in the fridge for an hour. That’s ONE HOUR. Don’t leave it any longer than that or you really will end up with a very salty result. I know this from experience because one time I forgot about it. Not a good idea!

Now turn your attention to the marinade.

To prepare the marinade

Get a small pot and put it on the stove top. Bung in some soy sauce – you’ll need enough of it to cover your salmon fillet. Warm it over a low heat. Add a couple of tablespoons of runny honey. Cut the orange, with peel still on, into about eight pieces and bung them in the pot too. Stir. The idea is to infuse these flavours into your marinade. Once the honey has dissolved into the liquid, then set aside the marinade to let it cool.

Cook’s Tip – it might seem strange to use orange with salmon, but this is what works best. I’ve tried this dish with both lemon and lime and it’s not anything like as good as it is when you make it with orange.

Remove the salmon fillet from the fridge, unwrap it and wash it well. Wash off all the salt. Don’t overdo it – do it quickly so you don’t make the salmon soggy and waterlogged. Using your fingers, you should be able to feel how your soft, juicy and succulent piece of salmon now feels much drier. Don’t worry. It’s supposed to be like this. 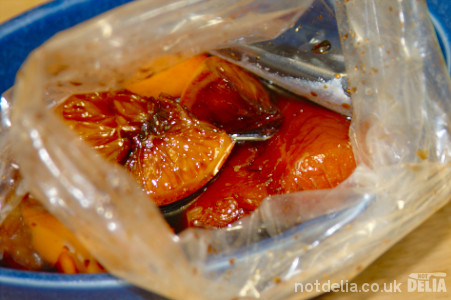 Now put the salmon into a plastic food bag. Add the marinade, orange pieces and all. Ideally, you’d leave this overnight in the fridge but if you’re in a hurry, then it’s about an hour minimum for the marinating. The longer you leave it – and we’ve left it for up to three days – the darker and stronger it becomes. I’d not risk leaving it for any longer than that, though.

When you’ve done the marinating for as long as you wish, remove from the fridge and cut into thin slices. Serve.

– here are some I made earlier.

These are just a couple of ideas for what you can do with your marinated salmon.

In this first one you can see how I sliced it and served it as part of a salad. Honestly, I’ve no idea what the dish is exactly. (It came from one of my 2008 photo files.) It looks like some kind of mousse on salad leaves topped with slices of the marinated salmon. I’m sure you can come up with your own ideas too. As I mentioned earlier, this goes beautifully with avocado too. 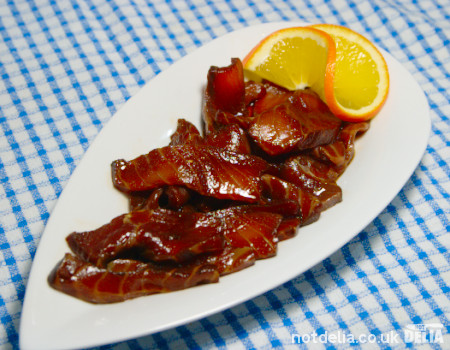 The second one shows how it becomes very dark, sweet, and almost sticky if you leave it for a few days. This one was even darker and stickier than normal because I cut the salmon into slices before it went into the marinade. It might look like an odd way to serve salmon, but it’s absolutely delicious. Trust me.