Here’s another cheesy nibble from our pal Theodore Koukouvitis, author of The Smart Tourist’s Guide to Greece! 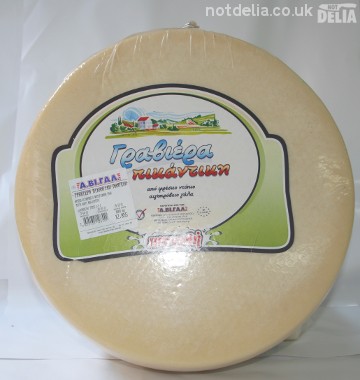 Kefalotyri (literally meaning “head-cheese” or “a head of cheese”) is the iconic hard Greek cheese. It is the ideal cheese for grating and is used in copious amounts over pasta, salads, roasts and other foods that beg for some grated cheese.

Kefalotyri is made from goat’s or sheep’s milk, sometimes from a mix of both, giving it a complex and unique aroma that goes well with… well, almost everything!

This amazing hard cheese holds its consistency when pan-fried and is considered a delicacy when grilled with minimal spicing. Raw and by itself, kefalotyri makes a great “meze” for ouzo and is great when used with lentils or in soups. Kefalotyri is often used alongside lamb roasts as their flavours complement each other well.

In the past, huge quantities of low-quality kefalotyri were exported to Italy where they were used as grated cheese for pasta, and there the cheese was known simply as formaggio greco. This kefalotyri of old had a notorious reputation as being the hardest cheese on Earth and one of the worst cheeses, that could not possibly be consumed as is. In a famous document of the late 19th century, the physics of kefalotyri and its bullet-proof qualities are explored in great detail; the cheese was actually so hard that it was impervious to gunshots. This gives us a hint as to how hard their cheese really used to be!

Since then, though, kefalotyri has evolved and there has been numerous attempts to break it free of its not-so-glamorous past. As a result, many cheese producers have renamed their kefalotyri as kefalograviera, a name that draws both from the traditional kefalotyri but also plays on the name of Gruyère. However, kefalotyri and kefalograviera are essentially the same thing.

Thanks to the amazing diversification of kefalotyri, nowadays there are numerous Greek cheeses that are classified as kefalotyri but are quite different from each other. These include the three famous kefalograviera cheeses: Graviera Naxou, Graviera Kritis and Graviera Agrafon (all equally delicious!)

Saganaki is a favourite meze and is very easy to make. It makes for a great starter and goes exceptionally well with fresh, crusty breads and red wine.

3. Use the other tbsp of olive oil to cover the kefalotyri.

4. Cover the oil-soaked kefalotyri with flour.

5. When the oil in the frying-pan’s sizzling hot, place the kefalotyri in the pan.

6. Fry on both sides until the kefalotyri has turned a golden-brown colour. (Don’t let it melt!)

7. Serve the saganaki with freshly squeezed lemon juice and some basil on top.