On our travels around Asia from time to time we’ve come across some very unusual foodstuffs.

Some of them are native to the region, like the flying ants with chilli and garlic from Northern Thailand. They’re a seasonal delicacy – they swarm for just a few days each year. Their wings drop off and they’re picked up off the ground. We watched them being collected in Chiang Mai and they were being hawked around the bars in Bangkok a couple of days later. (Someone offered us some. They tasted of – surprise, surprise – chilli and garlic.)

Others are local takes on Western food. One breakfast in Siem Reap that was memorable for all the wrong reasons included “toast” that was a slice of bread that clearly hadn’t been anywhere near a toaster. When we pointed it out to the waitress, she prodded a finger into it and said challengingly, “Still warm.”

But we weren’t sure exactly where to categorise this particular offering from a supermarket in Thailand: 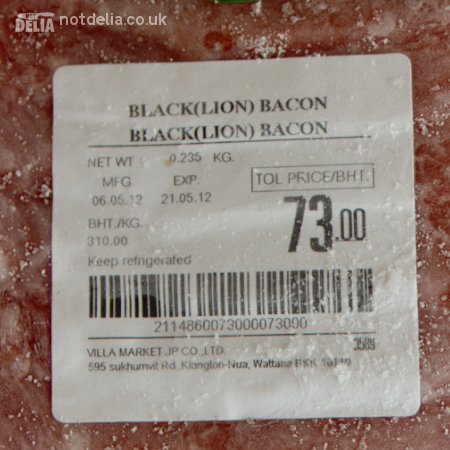 Now, we’re familiar with green bacon, as an alternative term for unsmoked bacon. But what’s black bacon? Is it bacon that’s gone beyond the crispy stage?

As for the lion bit… Well, we’ve had beef bacon in halal hotel restaurants in Malaysia. (I wouldn’t recommend it.) So there are precedents for bacon made from animals other than pigs. And Far Eastern cuisine is renowned for its relaxed, “anything goes” approach to animal foodstuffs.

But this goes well beyond eating chicken feet, fish maws, dog – or even cat. Asian lions are an endangered species, after all – there’s only a few hundred of them left in the wild. Should we call the CITES police?

Don’t worry, no illegal trade’s been going on here. This was just a supermarket price coding sticker and the packet itself carried the words “Loin Bacon”. In other words, just like back bacon (not “black”, then), but without the little “tail” of streaky bacon you usually get on back bacon in the UK.

Just as well. We love bacon, but I prefer mine from pigs.