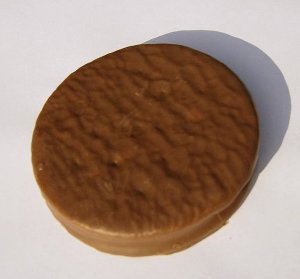 Apparently not. It’s just the change in your perception as you go from being a child to an adult.

How did this question arise, anyway? We were having a quiet beer at the California Bar on Sisowath Quay in Phnom Penh and some Aussie guys were debating the Wagon Wheels controversy at the bar. We were sitting a little way behind them at a table with our laptops fired up. One of the Aussies turned to us and said, “Hey, you guys are online. How big is a Wagon Wheel?” We were happy to oblige. And, after all, there’s chocolate on Wagon Wheels, so there’s our chocolate posting for today.

Why should Aussies be concerned about Wagon Wheels? Because they’re an Aussie invention – created by Garry Weston, son of Canadian businessman W. Garfield Weston and head of the family’s Australian operation. They were launched at the Olympia Food Fair in, would you believe, 1948. So it comes as no great surprise to find that they have a following in Australia, Canada and the UK.

But there are subtle divergences in the Aussie, Canadian and UK versions. Burton’s, the UK manufacturers, swear blind that there’s never been any shrinkage in the UK version and that it’s simply that the biscuits look that much bigger in kiddies’ hands than they do in adult hands. At 88 mm wide, the Aussie version is bigger in diameter than the UK product – a full 14 mm bigger, or half an inch if you’re still using Imperial measurements. On the other hand, the UK version’s 4 mm thicker.

I was surprised to discover that Wagon Wheels are also very popular in Iran, apparently. But I wasn’t able to find any data on waning Wagon Wheels there.