We’ve already looked at the question of food safety in eggs, and the advances that have been made in the last decade in making them salmonella-free. Now it’s time to look at the related question of the conditions that eggs are produced in. Does it make any difference where an egg comes from?

There are several different types of egg farming, defined primarily in terms of how the hens are housed: 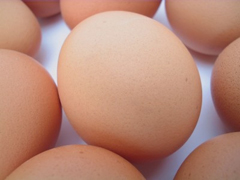 You’d think that the free-range and organic birds would be healthier than the others, wouldn’t you? Surprising though it may seem, birds kept in barren cages may in fact have some health advantages over free-range birds. According to a 1997 study by the Farm Animal Welfare Council (a UK Government body), disease control and protection from predators is at its highest in the cage system. (Free-range hens are able to walk through their droppings, and to come into contact with wild birds.) It’s also easier to provide caged hens with a stable environment.

On the other hand, some of the findings of that study may be flawed. Although the FAWC study found that the confined space per hen suppressed aggression, campaign group Compassion in World Farming suggests that the massive feather loss seen in caged birds is due partly to birds in neighbouring cages pecking each other’s feathers out.

A visit to a battery farm by a team from the Independent on Sunday and CIWF in April 2008 found that the birds in Britain’s biggest egg farm were being kept – perfectly legally – in cages stacked five tiers high, five birds to a cage, in the midst of overwhelming smell and noise. Many of the birds had suffered feather loss and wing damage, in scenes reminiscent of Hugh Fearnley-Whittingstall’s Channel 4 series, Hugh’s Chicken Run, about the miserable conditions in which broiler chickens were kept.

Small wonder, then, that free-range eggs are becoming increasingly popular. In early 2008 retail sales of eggs in the UK exceeded 50% for the first time. However, eggs used in catering and in preparation of other foods are still mostly battery-produced – so free-range production in the UK is still only about a third of the total.

An EU directive is due to come into force in January 2012 banning barren cages (although slightly bigger “enriched” cages with perches will still be allowed). But despite the strong scientific evidence that the welfare of egg-laying hens suffers in barren cages, many European countries are calling for the directive’s enforcement to be delayed by 10 years – and some producers want it to be abandoned altogether. Currently, of the 300 million egg-laying hens in the EU, more than three-quarters of them are kept in battery farms.

The British Egg Information Service is apparently neutral on the question of whether free-range or battery is “better” – perhaps understandably, in view of its mixed membership. The British government, on the other hand, has come down strongly in favour of the EU directive being implemented as planned.

An increasing number of retailers and food manufacturers seem to be shifting their weight in favour of free-range eggs. CIWF have instituted an award scheme, the Good Egg Awards, to encourage businesses to stop sourcing their eggs from battery farms. Sainsbury’s and Waitrose have already won awards, and Morrisons look set to follow (although Tesco and Asda have yet to make any similar commitment). Hellman’s UK, noted for their mayonnaise, and Cadbury – who use egg in their Creme Eggs – recently joined them.

Back to the original question: does it make any difference where an egg comes from? It depends on your point of view.

As things stand, there doesn’t seem to be anything to suggest that free-range eggs are any more likely to be salmonella-free than battery-produced ones. And the jury’s still out on whether organic produce really brings health benefits to the consumer. On the other hand, the ethical aspect seems pretty clear. Birds kept in free-range or even barn conditions are better off than battery hens.

So next time you’re buying eggs, think about whether the few extra pence for free-range might not be a price worth paying.