Oops. I did it again. (OK, I’m not a fan of Britney Spears but it never hurts to mention a celebrity name on your blog.)

Despite having an already vast selection of knives, I bought another two.

I can resist anything but temptation. (Oscar Wilde, Lady Windermere’s Fan) – and there’s another famous name to help us out.

Let’s get back to the point of this and a not very famous name. Anyone heard of Twin Fish knives? Nah, me neither. But I discovered a selection of Twin Fish knives in a department store in Thailand recently. These looked like seriously good bits of kit. And the price? THB 350 for the Japanese chef, and THB 220 for the smaller knife. (At the current exchange rate, that’s about £7 for the Jap chef.) Irresistible! (More about the smaller knife later, perhaps.)

So, let’s have a look at this one. You can see it in the photo above and also compare it to the one I’ve used for the last eight years. The new one is relatively light, weighing in at 213g, but it just feels so right and well balanced. 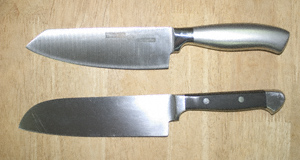 Notice the curvature of the blade in the new one. Oh! This feels good to cut with. It’s also modelled on the Global style (those genuine Japanese, cost-a-fortune knives with the hollow handles). What a beauty! I’d have cheerfully coughed up a lot more than the asking price for this one. £7? It’s a no-brainer!

I do understand the concept that buying cheap stuff can work out more expensive in the long term, because you have to keep replacing it. But my original Japanese chef knife, which also was inexpensive, has served me well for many years and probably would for many more. It’s just that I’m fickle and my affections have changed to the new love of my life – the Twin Fish Japanese Chef knife.

The Twin Fish knives are made in Thailand but I don’t think the brand is well known elsewhere. There’s very little information about them on the Internet. It’s a shame. These knives are beautiful! Think Global but at a fraction of the cost. Buy one if you get the chance.