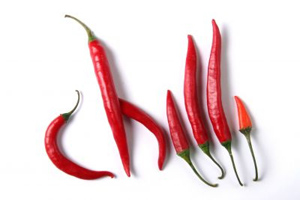 Gordon Ramsay was in the news again recently. Gee, that guy really does seem to get everywhere!

This time he was in India’s north-eastern state of Assam observing a woman making a bid for the world record for eating ghost chillies, the hottest chillies in the world. She managed 51 in two minutes, and said afterwards that she felt terrible – she had managed 60 at a previous event.
You can read the story here:
BBC News: Indian in record chilli eating attempt

According to the BBC story:
“Mr Ramsay tried a chilli but said ‘it’s too much’ and pleaded for water.”

Really? I find this difficult to believe. Anyone who knows anything about spicy food will tell you that water is just about the worst thing you can use to reduce the heat. The heat in chillies comes from the oil in the fruit and if you slosh water onto it, you are simply spreading it further and making the discomfort worse. The quickest ‘cure’ is a mouthful of steamed rice to mop up the chilli oil.

Personally I think these records are a bit pointless, and had thought that Guinness World Records had banned eating contests on the basis that they could be injurious to health. (I couldn’t find any evidence of this.)

Mind you, given the choice between chillies or cockroaches, I’d take the chillies any day. Have a look at this:
Guinness World Records: Most cockroaches eaten
Urghh!