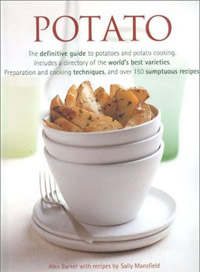 Unusually for a cookbook, there’s no blurb about the authors so it’s straight on with the show.

This fascinating book is in three parts: background information, potatoes of the world, and recipes. It starts with the history of the potato, which was thought to be first cultivated by the Incas in the foothills of the Andes mountains from c. 400 BC. The potato influenced their whole lives. Indeed the Peruvian potato goddess is depicted holding a potato plant in each hand. And the South American Indians measured time by the length of time it took to cook potatoes.

Sir Francis Drake is reputed to have first brought potatoes back to Britain in the late 1500s. By the end of the 18th century potatoes had become a major crop in Europe. By this time they accounted for about 80% of the diet of Irish peasants.

The book goes on to discuss potato production today and the nutritional value of potatoes. Next it describes how to grow your own.

Preparation techniques are covered after that: peeling, scraping, grating, slicing, dicing etc. There’s a whole page on chips. Then it’s on to cooking techniques: roasting, baking, mashing, even potato pastry making. Buying and storing next. They should be stored in a cold dark place. (Aha, so that’s why ours have been turning green after only a few days. I should’ve read this section earlier.) And finally in this chapter there’s a great deal of information about equipment: peelers, graters, knives, mashers, ricers… You name it, they’ve got it.

The second part of the book discusses potatoes on the world and the revival of old potato breeds. It then goes on to describe about 200 breeds from all over the world with a description, details of origin, availability, suitability for cooking, and, where relevant, for home growing.

And at last we get to the recipes. This part of the book is divided into eight chapters: soups, starters and snacks, salads, side dishes, meat and poultry dishes, fish dishes, vegetarian dishes, breads and scones. All this from the humble potato. The book includes excellent photography. Each recipe is given its own page with a picture of the finished dish plus several smaller photos showing the “how to” process. Additionally there are several full-page photos. All great stuff.

The recipes themselves are imaginative but unfussy. All sorts of cuisines are covered. There’s aloo sag (Indian), Tex-Mex baked potatoes with chilli, Toulouse potato salad, Cullen Skink (Scottish), Swiss soufflé potatoes, to name just a few of the 150+ contained in the book.

I find this book useful for ideas. For example, pork escalopes baked with apple and potato rösti wasn’t something I’d tried before. Very nice they were too. It’s also very useful if you want to get back to basics and remind yourself of the “correct” way to make something like potato croquettes or duchesse potatoes.

If you like potatoes then this is an excellent book to buy.

Potato
The definitive guide to potatoes and potato cooking

One Response to “Potato – by Alex Barber & Sally Mansfield”